The 2000 U.S. census counted 4,866 residents in the half-square-mile neighborhood—amounting to 9,642 people per square mile, about an average population density for the city and the county. In 2008 the city estimated that the population had increased to 5,120. The median age for residents was 37, older than the city's average.

The median household income in 2008 dollars was $71,398, considered to be a high figure in Los Angeles. The percentage of households earning $125,000 or more was high, compared to the county at large. The average household size of 2.1 people was low for Los Angeles. Renters occupied 64.7% of the housing units, and home- or apartment owners the rest.

In 2000, there were 168 military veterans, 4.1% of the population, considered a low rate for the county overall, but the percentage of veterans who served during World War II or the Korean War was among the county's highest.

Relation of Carthay to other communities: 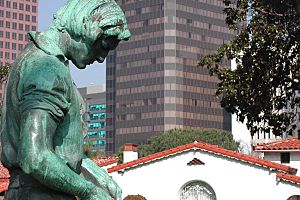 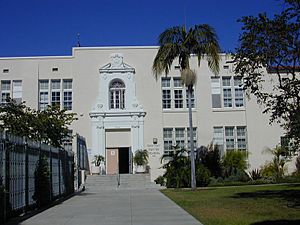 There is one school within Carthay's boundaries—Carthay Center Elementary, a K–6 school at 6351 West Olympic Boulevard. Starting in Fall 2014, Carthay Center Elementary becomes Carthay School of Environmental Studies Magnet, a residential full-school magnet. Spaces are reserved for students in the traditional attendance boundaries, but the school is also open to magnet school applicants from throughout LAUSD. The Environmental Studies program will be building on programs such as the celebrated Garden Science program at the school.

All content from Kiddle encyclopedia articles (including the article images and facts) can be freely used under Attribution-ShareAlike license, unless stated otherwise. Cite this article:
Carthay, Los Angeles Facts for Kids. Kiddle Encyclopedia.