Koreans began immigrating in larger numbers in the 1960s and found housing in the Mid-Wilshire area. Many opened businesses as they found rent and tolerance toward the growing Korean population. Many of the historic Art deco buildings with terra cotta façades have been preserved because the buildings remained economically viable for the new businesses.

Despite the name evoking a traditional ethnic enclave, the community is complex and has an impact on areas outside the traditional boundaries. While the neighborhood culture was historically oriented to the Korean immigrant population, Korean business owners are creating stronger ties to the Latino community in Koreatown. The community is highly diverse ethnically, with half the residents being Latino and a third being Asian. Two-thirds of the residents were born outside of the United States, a high figure compared to the rest of the city.

The 1930s saw the height of the area's association with Hollywood. The Ambassador Hotel hosted the Academy Awards ceremony in 1930, 1931, 1932, and 1934. Senator Robert F. Kennedy was assassinated in 1968 at Ambassador Hotel. About this time, the surrounding neighborhood began a steep decline. After most of the hotel structures were demolished, the Robert F. Kennedy Community Schools were built on the site with the first opening in 2009.

The once-glamorous mid-Wilshire area with vacant commercial and office space attracted wealthier South Korean immigrants in the 1960s. They found inexpensive housing and many opened businesses there. The relaxed federal immigration rules following the Immigration and Nationality Act of 1965 resulted in a growing immigrant community. Many of the Art deco buildings with terra cotta facades in the area were preserved because they remained economically viable with the new businesses that occupied the structures.

The 1992 Los Angeles riots had a significant impact on the community. Korean Americans felt they received very little if any aid or protection from police authorities as a result of their low social status and the language barrier. According to Professor Edward Park, director of the Asian Pacific American Studies Program at Loyola Marymount University, the 1992 violence stimulated a new wave of political activism among Korean-Americans, but it also split them into two camps. The liberals sought to unite with other minorities in Los Angeles to fight against racial oppression and scapegoating. The conservatives emphasized law and order and generally favored the economic and social policies of the Republican Party. The conservatives tended to emphasize the political differences between Koreans and other minorities, specifically blacks and Hispanics.

In late 2008, the City of Los Angeles designated Koreatown a special graphics district (along with Hollywood and the downtown neighborhood of South Park/LA Live). The designation allows for digital signage and electronic billboards, currently not permitted by city code, to be installed on building facades. The designation allowed Times Square and Shibuya District-inspired buildings lined with LCD jumbotrons. The 300-square block graphics district is bordered by 6th Street and Olympic Boulevard from the north and south, and St. Andrews Place and Shatto from the west to east.

More recently, some residents have alleged the community has experienced declining political power due to redistricting.

Since Koreatown has a Latino majority, it's not unusual to find Latino employees in restaurants and grocery stores speaking Korean with customers or Korean store owners engaging Latino customers in Spanish. An example of a cultural interchange between Koreans and Latinos in Koreatown is the popularity of Korean-inspired taco trucks in Los Angeles that feature classic Mexican food infused with Korean ingredients. 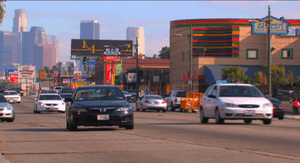 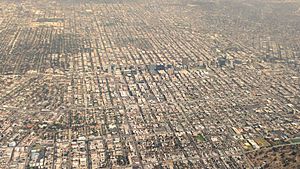 The Koreatown Regional Commercial Center runs along Olympic Boulevard and is "generally bounded by Eighth Street on the north, Twelfth Street on the south, Western Avenue on the west, and continues east towards Vermont Avenue" according to the city of Los Angeles Wilshire Community Plan.

The Mapping L.A. project of the Los Angeles Times states as follows:

Koreatown is flanked by East Hollywood to the north, Westlake to the east, Pico-Union, Harvard Heights and Arlington Heights to the south, Mid-Wilshire and Windsor Square to the west and Larchmont to the northwest. The street boundaries are Beverly Boulevard on the north, Virgil Avenue, Wilshire Place and Westmoreland Avenue on the east, Olympic Boulevard on the south and Crenshaw Boulevard and Wilton Place on the west.

The first recorded residence in Wilshire Park was built in 1908; this transitional Victorian-Craftsman is an example of the work of architect Frank M. Tyler. The district also features at least twelve other Tyler-designed residences. The city has designated three Wilshire Park homes as Los Angeles Historic-Cultural Monuments, including the William J. Weber House, built in 1921, designed by Lloyd Wright and honored as a Historic–Cultural Monument in 2002, the A.W. Black Residence, built in 1913 and designed by John Frederick Soper (honored in 2005), and the William J. Hubbard Residence, built in 1923 and designed by Allen Kelly Ruoff and Arthur C. Munson (honored in 2006).

These are nearby locations, not necessarily contiguous: 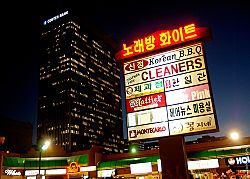 Koreatown is one of the densest neighborhoods in the United States.

The 2000 U.S. census counted 115,070 residents in the 2.7-square-mile neighborhood—an average of 42,611 people per square mile, the highest density of any community in Los Angeles County. In 2008, the city estimated that the population had increased to 124,281. The median age for residents was 30, an average age for both the city and Los Angeles County.

The median annual household income in 2008 dollars was $30,558, a low figure for Los Angeles, and the percentage of households that earned less than $20,000 was high. The average household size of 2.7 people was about the same as the rest of the city. Renters occupied 93% of the housing units, and house- or apartment owners the rest.

In 2020, approximately 600 residents were unhoused. 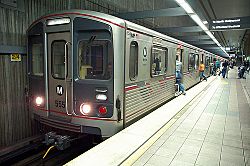 Red Line Train at the Wilshire-Vermont Metro station in Koreatown

The Los Angeles County Metropolitan Transportation Authority operates two subway lines in or near Koreatown — the B Line, beneath Vermont Avenue, and the D Line, beneath Wilshire Boulevard. The neighborhood is served primarily by the D Line Wilshire/Normandie station, but there are two other stops, Wilshire/Vermont and Wilshire/Western.

When it opened in 1929, the gracious structure on 6th Street was an architectural wonder, featuring the novel concept of one-stop shopping for fresh produce, meat and dry goods. It was an urbane attraction in the fashionable Wilshire District at a time when movie stars played at the nearby Ambassador Hotel.

Olympic Boulevard has blocks dominated by Korean-language signs and new blue-tile-roofed shopping centers. This initial Korean business area has spread to an area bounded by Olympic Boulevard, Vermont Avenue, 8th Street and Western Avenue. The Korean business area also sprawls to the north and south along Western and Vermont for three miles, and to the east and west along Olympic for two miles. South Korean investment has been a large contributor to the neighborhood economy since the 1960s. Since the early 2000s, that investment has increased greatly, ballooning to an estimated $1 billion in new construction investment. Jamison Services, Inc is Koreatown's biggest landlord and most prolific residential builder. The area also has a vibrant nightlife with many lively restaurants and clubs, especially Korean barbeque restaurants and karaoke bars. 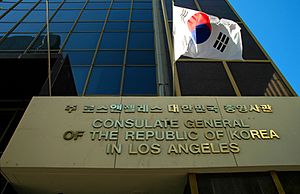 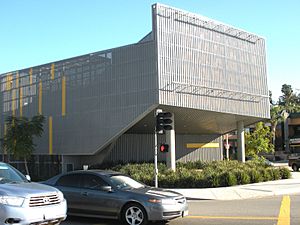 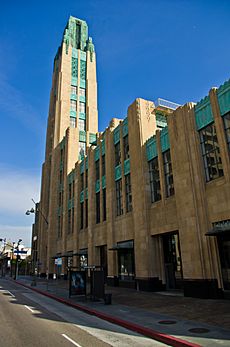 21.4% of Koreatown residents aged 25 and older have a four-year degree, an average rate for both the city and the county. The percentage of residents with less than a high school diploma was high for the county.

Schools within the Koreatown borders are:

The Korean Education Center, affiliated with the government of South Korea, is in Suite 200 at 680 Wilshire Place. 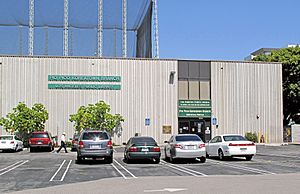 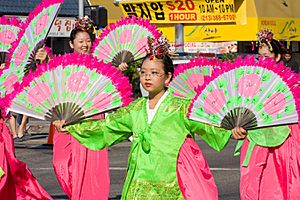 Parade performers during the Korean Festival

All content from Kiddle encyclopedia articles (including the article images and facts) can be freely used under Attribution-ShareAlike license, unless stated otherwise. Cite this article:
Koreatown, Los Angeles Facts for Kids. Kiddle Encyclopedia.