Bunker Hill is a neighborhood in Los Angeles, California. It is part of Downtown Los Angeles.

Historically, Bunker Hill was a large hill that separated Downtown Los Angeles from the western end of the city. The hill was tunneled through at Second Street in 1924, and at Third and Fourth Streets. In the late 20th century, the hill was lowered in elevation, and the entire area was redeveloped to supplant old frame and concrete buildings with modern high-rises and other structures for residences, commerce, entertainment, and education. 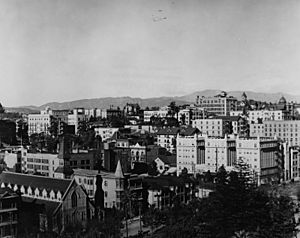 A view of Bunker Hill, 1900, with Pershing Square in the foreground

In 1867, a wealthy developer, Prudent Beaudry, purchased a majority of the hill's land. Because of the hill's excellent views of the Los Angeles Basin and the Los Angeles River, he knew that it would make for an opulent subdivision. He developed the peak of Bunker Hill with lavish two-story Victorian houses that became famous as homes for the upper-class residents of Los Angeles. Angels Flight, now dubbed "The World's Shortest Railway", took residents homeward from the bottom of the 33% grade and down again.

Initially a residential suburb, Bunker Hill retained its exclusive character through the end of World War I, but in the face of increased urban growth fed by an extensive streetcar system, its wealthy residents began leaving for enclaves on the Westside and Pasadena. Bunker Hill's houses were increasingly sub-divided to accommodate renters. Still, Bunker Hill was at this time "Los Angeles's most crowded and urban neighborhood". By World War II the Pasadena Freeway, built to bring shoppers downtown, was taking more residents out. Additional post-war freeway construction left downtown comparatively empty of both people and services. The once-grand Victorian mansions of Bunker Hill became the home of impoverished pensioners.

In 1955, Los Angeles city planners decided that Bunker Hill required a massive slum clearance project. The top of Bunker Hill was cleared of its houses and then flattened as the first stage of the Bunker Hill Redevelopment Project to populate Bunker Hill with modern plazas and buildings. When the height limit of buildings for Los Angeles was finally raised (previously buildings were limited to 150 feet), developers built some of the tallest skyscrapers in the region to take advantage of the area's existing dense zoning. In approving such projects, the city sought to project a modern, sophisticated image.

The project is the longest redevelopment project in Los Angeles history. The majority of the skyscrapers on Bunker Hill were built in the 1980s, with a new skyscraper or two being finished nearly every year. However, the momentum died down in the 1990s, shortly after the fifty-two story Two California Plaza was finished. In 1999, the vacancy rate for downtown commercial skyscrapers was 26%, one of the highest in the nation for that time. Planned office towers were canceled, including California Plaza Three, and the nearby four-towered Metropolis (brought back to life in 2005). 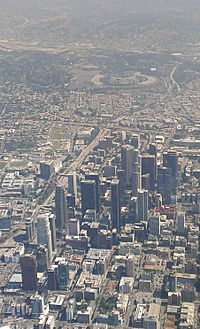 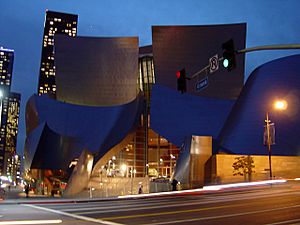 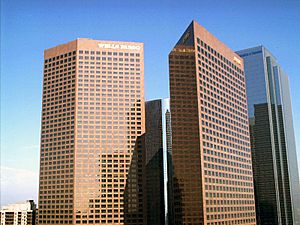 The Wells Fargo Center, One California Plaza and Two California Plaza, today stands on the highest point of Bunker Hill. As seen from the top of the Westin Bonaventure Hotel. 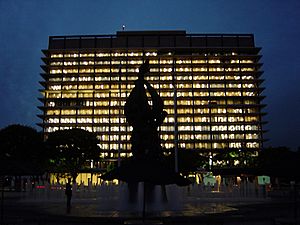 Many of the older buildings and the early high-rises surrounding Bunker Hill are undergoing adaptive reuse from commercial to residential. This trend began in 2000, when the Los Angeles City Council passed an Adaptive Re-Use Ordinance, allowing old unused office buildings to be redeveloped as apartments or "lofts". Developers realized there was a high level of pent-up demand for living in or near downtown, by both artists and employees of various firms in the financial district and government workers in the Civic Center, and that they could profit by supplying housing to meet such demand.

Because of the popularity of the New Urbanism in California, the city has required developers to build mixed-use residential buildings as much as possible. This means that the first floor of such residential developments is devoted to commercial retailers, so that residents do not have to constantly drive around for all their shopping trips and buildings present a more welcoming facade to passersby on the sidewalk.

Contributing to the resurgence of Bunker Hill has been the construction of public venues, such as the Walt Disney Concert Hall and Cathedral of Our Lady of the Angels, and the Museum of Contemporary Art, as well as the Colburn School, a community performing arts school and collegiate conservatory. In February 2007 $2.05 billion was approved for the Grand Avenue Project, which over the next 10 years will bring in over 2,000 new residential units, over 400 of them being affordable units for all degrees of low-income families; 1 million square feet (93,000 m²) of office space; a Mandarin Oriental hotel; 600,000 square feet (56,000 m²) of retail and entertainment space; and the Grand Park, connecting City Hall to Bunker Hill. Office space and residential units will be in several skyscrapers ranging between 35-55 stories each. Nearby planned projects include L.A. Live on Figueroa Street and Olympic Boulevard in South Park (the southern end of the Bunker Hill area). A new major modern art museum, The Broad, opened on September 20, 2015, next to Disney Hall.

The Angels Flight tramway, which was rebuilt in 1996 near where it was originally located and shut down after a fatal accident in 2001, reopened on March 15, 2010 to provide a link between Bunker Hill and the revitalized downtown area. One sign of the success of the downtown renaissance is that the office vacancy rate for the fourth quarter of 2004 was 16%, compared to 19% for 2003, and 26% for 1999.

On the topic of building affordable housing for very low-income to moderate-income, Principal City Planner Jane Blumenfeld said, "We are trying to make it attractive to build [downtown] and get this added affordable housing that we normally wouldn't have. We need an adequate amount of lower income housing so that in 20 years Downtown doesn't become an exclusive neighborhood."

The Emerson apartment building, owned by the Related Companies, has 271 units, of which 216 are leased at market rates. The other 55 units are at subsidized rates to tenants whose annual incomes are less than 50% of the local median, which was $42,700 for a family of four in 2014. 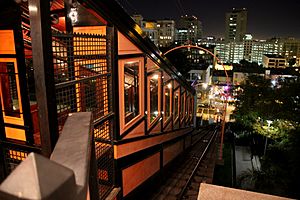 On "The Adventures of Philip Marlowe" radio program with episode named "Baton Sinister" dated September 17, 1949, Angels Flight is referenced as Marlowe has a rendezvous set in Bunker Hill.

In the 1940s and 1950s, Bunker Hill was a popular film setting, especially in the film noir genre, because of its Victorian homes, its rambling hillside apartments and flophouses, its Angels Flight funicular, and its mean (or at least mean-looking) streets. It was used extensively in such crime films as Cry Danger (1951), Kiss Me Deadly (1956), Criss Cross (1949), Joseph Losey's M (1951) and Angel's Flight (1965). Director Curtis Hanson recreated Bunker Hill in another hilly neighborhood altogether in his Oscar Award-winning L.A. Confidential (1997). Kent Mackenzie made a film in 1956 called Bunker Hill which was about the displacement of the residents who had to make way for construction. Another film by Mackenzie that was set in the area, his neo-realist and semi-documentary feature The Exiles (1961) depicts the lives of a tribe of urban Indians on Bunker Hill in the late 1950s.

Angels Flight and its Third Street neighborhood, c. 1930s, were recreated in South Africa for the filming of Ask the Dust (2006), based on the novel by John Fante, which was set in the district in the 1930s. Fante also wrote a book called Dreams From Bunker Hill, his last novel, dictated near death to his wife.

The 2nd Street Tunnel under Bunker Hill is widely used in film and advertising.

Bunker Hill is also the title of (and referenced in) the 1992 song from the Free-For-All album by Angelino transplant Michael Penn and a B-Side-song of the band Red Hot Chili Peppers. Jim Dawson's 2008 book Angels Flight includes several chapters, complete with many dozens of early photos, on Bunker Hill and its literary and film background.

It is represented in the 2013 video game Grand Theft Auto V as "Pillbox Hill" ("Pillbox" and "Bunker" being similar) in the game's rendition of Los Angeles as Los Santos.

The 60-foot wide double stairway public art installation Library Steps was designed by Lawrence Halprin in 1989. It physically and symbolically connects the main entrance of the Los Angeles Public Library at Fifth Street with Hope Place and the Kechum-Downtown YMCA to the north. The double stairs flank a cascading river rock "stream" that flows from the pool surrounding Robert Graham's 1992 public art sculpture Source Figure, and terminate at Fifth Street with a fountain element and seating.

Contributing to the resurgence of Bunker Hill has been the construction of public venues, such as Walt Disney Concert Hall and the Museum of Contemporary Art.

The Broad modern art museum opened next to Disney Concert Hall on September 20, 2015.

All content from Kiddle encyclopedia articles (including the article images and facts) can be freely used under Attribution-ShareAlike license, unless stated otherwise. Cite this article:
Bunker Hill, Los Angeles Facts for Kids. Kiddle Encyclopedia.