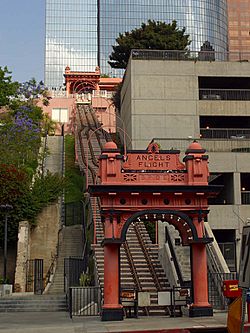 Angels Flight, view from lower end during closure period (May 2004) while cars were placed in storage after an accident.

Angels Flight is a landmark 2 ft 6 in (762 mm) narrow gauge funicular railway in the Bunker Hill district of Downtown Los Angeles, California. It has two funicular cars, Olivet and Sinai, running in opposite directions on a shared cable, on the 298 feet (91 m) long inclined railway.

The funicular has operated on two different sites, using the same cars and station elements. The original Angels Flight location, with tracks connecting Hill Street and Olive Street, operated from 1901 until it was closed in 1969, when its site was cleared for redevelopment.

The second Angels Flight location opened one half block south of the original location in 1996, with tracks connecting Hill Street and California Plaza. It was shut down in 2001, following a fatal accident, and took nine years to commence operations again. The railroad restarted operations on March 15, 2010. It was closed again from June 10, 2011 to July 5, 2011, and then again after a minor derailment incident on September 5, 2013. The investigation of this 2013 incident led to the discovery of potentially serious safety problems in both the design and the operation of the funicular.

Before the 2013 service suspension, the cost of a one-way ride was 50 cents (25 cents for Metro pass holders). Although it was marketed primarily as a tourist novelty, it was frequently used by local workers to travel between the Downtown Historic Core and Bunker Hill. In 2015, the executive director of the nearby REDCAT arts center described the railroad as an important "economic link", and there was pressure for the city to fund and re-open the railroad. After safety enhancements were completed, Angels Flight reopened for public service on August 31, 2017, now charging $1 for a one-way ride (50 cents for Metro pass holders).

Built in 1901 with financing from Colonel J.W. Eddy, as the "Los Angeles Incline Railway", Angels Flight began at the west corner of Hill Street at Third and ran for two blocks uphill (northwestward) to its Olive Street terminus. Angels Flight consisted of two vermillion "boarding stations" and two cars, named Sinai and Olivet, pulled up the steep incline by metal cables powered by engines at the upper Olive Street station. As one car ascended, the other descended, carried down by gravity. An archway labeled "Angels Flight" greeted passengers on the Hill Street entrance, and this name became the official name of the railway in 1912 when the Funding Company of California purchased the railway from its founders.

The original Angels Flight was a conventional funicular, with both cars connected to the same haulage cable. Unlike more modern funiculars it did not have track brakes for use in the event of cable breakage, but it did have a separate safety cable which would come into play in case of breakage of the main cable. It operated for 68 years with a good safety record.

During operation in its original location, the railroad was owned and operated by six additional companies following Colonel Eddy. In 1912 Eddy sold the railroad to Funding Company of Los Angeles who in turn sold it to Continental Securities Company in 1914. Robert W. Moore, an engineer for Continental Securities, purchased Angels Flight in 1946. In 1952 Lester B. Moreland and Byron Linville, a prominent banker at Security First National Bank, purchased it from Moore and the following year Lester B. Moreland's family purchased Byron Linville's interest in the Railway, becoming sole stockholder. In 1962 the city forced Moreland to sell though condemnation and the city's redevelopment agency hired Oliver & Williams Elevator Company to run it until it was shut down on May 18, 1969. The following day the dismantling began and the cars were hauled away to be stored in a warehouse. The railroad's arch, station house, drinking fountain, and other artifacts were taken to an outdoor storage yard in Gardena, California.

The only fatality that involved the original Angels Flight occurred in the autumn of 1943, when a sailor attempting to walk up the track itself was crushed beneath one of the cars.

In November 1952, the Beverly Hills Parlor of the Native Daughters of the Golden West erected a plaque to commemorate fifty years of service by the railway. The plaque reads:

Built in 1901 by Colonel J.W. Eddy, lawyer, engineer and friend of President Abraham Lincoln, Angels Flight is said to be the world's shortest incorporated railway. The counterbalanced cars, controlled by cables, travel a 33 percent grade for 315 feet. It is estimated that Angels Flight has carried more passengers per mile than any other railway in the world, over a hundred million in its first fifty years. This incline railway is a public utility operating under a franchise granted by the City of Los Angeles.

In 1962, at its first meeting, the city's new Cultural Heritage Board designated Angels Flight a Los Angeles Historic-Cultural Monument (No. 4), along with four other locations. Los Angeles was early in enacting preservation laws, and the first sites chosen each were "considered threatened to some extent," according to the history of the board, now the Cultural Heritage Commission. 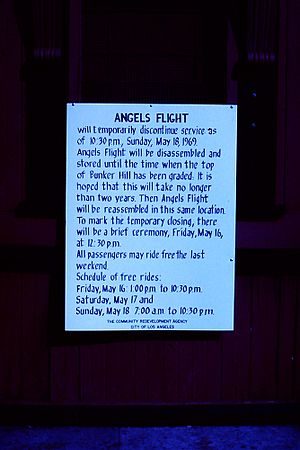 Angels Flight; May 1969, Sign posted before the railway was closed in 1969

The railway was closed on May 18, 1969 when the Bunker Hill area underwent a controversial total redevelopment which destroyed and displaced a community of almost 22,000 working-class families renting rooms in architecturally significant but run-down buildings, to a modern mixed-use district of high-rise commercial buildings and modern apartment and condominium complexes. Both of the Angels Flight cars, Sinai and Olivet, were then placed in storage at 1200 S. Olive Street, Los Angeles. This was the location of Sid and Linda Kastner's United Business Interiors. At this location the Kastners maintained "The Bandstand," a private museum. The Bandstand featured antique coin-operated musical instruments where one of the cars (Sinai) was on display in the museum. Olivet was stored in the garage of the building. They were stored at this location for 27 years at no charge in anticipation of the railway's restoration and reopening, which according to the city's Redevelopment Agency, was originally slated to take place within two years. 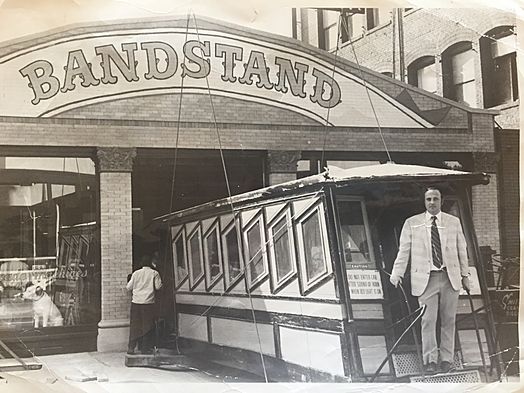 After being stored for 27 years, the funicular was rebuilt and reopened by the newly formed Angels Flight Railway Foundation on February 24, 1996, half a block south of the original site. Although the original cars, Sinai and Olivet, were used, a new track and haulage system was designed and built, a redesign which had unfortunate consequences five years later. As rebuilt, the funicular was 91 meters (298.6 feet) long on an approximately 33-percent grade.

Car movement was controlled by an operator inside the upper station house, who was responsible for visually determining that the track and vehicles were clear for movement, closing the platform gates, starting the cars moving, monitoring the operation of the funicular cars, observing car stops at both stations, and collecting fares from passengers. The cars themselves did not carry any staff members. Angels Flight was added to the National Register of Historic Places on October 13, 2000.

The death and injuries could have been avoided if any one of the following had taken place: 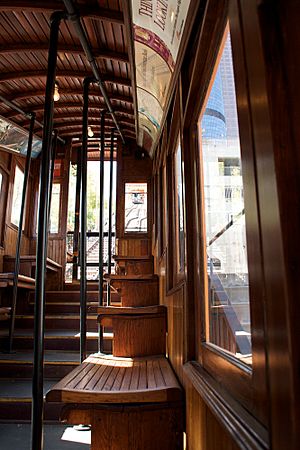 Interior of the renovated Angels Flight car in March 2010.

On November 1, 2008, both of the repaired and restored Angels Flight cars, Sinai and Olivet, were put back on their tracks and, on January 16, 2009, testing began on the railway. On November 20, 2009, another step in the approval process was achieved. On March 10, 2010, the California Public Utilities Commission approved the safety certificate for the railroad to begin operating again.

The new drive and safety system completely replaced the system which was the cause of the fatal 2001 accident. Like the original Angels Flight design and most traditional funicular systems, the new drive system incorporates a single main haulage cable, with one car attached to each end. Also like the original design, a second safety cable is utilized. To further enhance safety, unlike the original design, each car now has a rail brake system, as a backup to the main backup emergency brakes on each bull-wheel. Another added safety feature is an independent evacuation motor to move the cars should the main motor fail for any reason.

Angels Flight reopened to the public for riding on March 15, 2010. The local media covered the event with interest. Only a month after re-opening, Angels Flight had had over 59,000 riders. It connected the Historic Core and Broadway commercial district with the hilltop Bunker Hill California Plaza urban park and the Museum of Contemporary Art – MOCA. The cost of a one-way ride at that time was 50 cents, 25 cents with TAP card.

On June 10, 2011, the California Public Utilities Commission ordered Angels Flight to immediately cease operations due to wear on the steel wheels on the two cars. Inspectors determined that their fifteen-year-old wheels needed replacing. The railway reopened on July 5, 2011, after eight new custom-made steel wheels were installed on the two cars.

Plans to bring the railway back into service began in January 2017. Safety upgrades were made to the doors of the cars, and an evacuation walkway was added adjacent to the track. These enhancements were made by ACS Infrastructure Development through an agreement with Angels Flight Railway Foundation in exchange for a share of the funicular's revenue over the next three decades. Angels Flight reopened for public service on August 31, 2017.

All content from Kiddle encyclopedia articles (including the article images and facts) can be freely used under Attribution-ShareAlike license, unless stated otherwise. Cite this article:
Angels Flight Facts for Kids. Kiddle Encyclopedia.