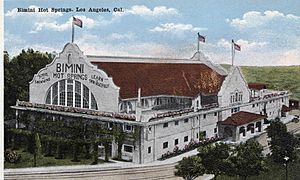 An exterior view of the Bimini Hot Springs building, circa 1920

In the 19th century, the area was a 45 acres (18 ha) marsh with 104 °F (40 °C) natural hot springs. The waters were discovered during oil drilling exploration. They were discovered by a man who was boring for oil at a depth of 1,750 feet (530 m) under 3 feet (0.91 m) of solid white marble. Named after the Bahamian island of Bimini, the venue was owned and operated by Dr. David W. Edwards, president and treasurer of the Bimini Water Company; and David W. Edwards, Jr. served as vice president and secretary. The company was founded December 31, 1902. In 1903, the bath house opened. In the following year, Bimini Hotel was built across the street, and the spring waters were pumped to it. In 1917, J. J. Warrick was manager of the baths and sanitarium. An outdoor pool was added to the baths in 1921. Mexicans were only allowed into the Bimini Baths "when it was too dirty for whites to swim in" it.

Besides the baths, the Bimini Water Company delivered plain and carbonated water to Los Angeles residents. The company provided the water prior to 1915 when the city mains installation occurred. The business went bankrupt in 1951 and the buildings were demolished in 1956.

In the present day, the springs area has become Bimini Slough Ecology Park, featuring native plant stands and a creekbed. The hotel has become headquarters for the Mary Lind Foundation.

The well was reported to yield 100 gallons a minute of water at a temperature of 104 °F. The primary alkalinity of the water gave it a peculiar soft feeling that led to the nickname, "the velvet baths." The well was drilled 1,750 feet (530 m) deep in Tertiary age sediments that make up the oil formation in this locale. Containing no sulphur, it carries a large quantity of sodium carbonate and sodium chloride, with some potassium chloride, magnesium carbonate, iron, alumina, and free carbonic acid.

The large wooden building contained a 50-yard main pool, a separate pool for women, and other private pools. In addition, the venue had a cafe, pool observation balcony, and 500 dressing rooms. The original building was destroyed in 1905 during a fire. It was rebuilt in 1906 in Mission revival style by a design of Thornton Fitzhugh. The new construction featured a Turkish Bath, additional pools, and rooftop gardens. The bathing resort also featured a sanitarium. Tub baths and three large swimming plunges were available for the public. A sanitarium hotel nearby was under the same management.

All content from Kiddle encyclopedia articles (including the article images and facts) can be freely used under Attribution-ShareAlike license, unless stated otherwise. Cite this article:
Bimini Baths Facts for Kids. Kiddle Encyclopedia.