East Hollywood is a densely populated neighborhood of 78,000+ residents in the central region of Los Angeles, California. It is notable for being the site of Los Angeles City College, Barnsdall Park and a hospital district. There are seven public and five private schools, as well as a branch of the Los Angeles Public Library and three hospitals. Almost two-thirds of the people living there were born outside the United States and 90% were renters. In 2000 the neighborhood had high percentages of never-married people and of single parents. 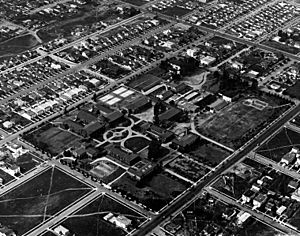 In the early 20th century, the East Hollywood area was a farming village that also encompassed some of what is now Los Feliz. Parts of the neighborhood were formerly known as "Prospect Park."

In 1910 the towns of Hollywood and East Hollywood approved annexation to the City of Los Angeles in order to tap into the city water supply. In 1914, Children's Hospital was relocated from downtown LA to Vermont Avenue and Sunset Boulevard. 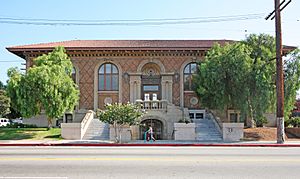 In 1916 steel magnate Andrew Carnegie donated the money to construct the Cahuenga Branch of the Los Angeles Public Library on Santa Monica Boulevard.

In the early 1920s, Barnsdall Park was built. The 1920s were also a time of massive immigration into East Hollywood. Armenian immigrants established the community that is now Little Armenia. The University of California Southern Branch, needing more space, moved west at the end of the 1920s to a ranch called Westwood and became UCLA. The old Southern Branch campus then became Los Angeles Junior College, which was later renamed Los Angeles City College.

In 1930 Cedars of Lebanon Hospital was formed when Kaspare Cohn Hospital moved from East Los Angeles to a new building on Fountain Avenue and was renamed.

In the summer of 1999 three Metro Red Line subway stations opened, connecting East Hollywood more efficiently to the rest of the city.

The 2000 U.S. census counted 73,967 residents in the 2.38-square-mile East Hollywood neighborhood—or 31,095 people per square mile, the third-highest population density in the city. In 2008, the city estimated that the population had increased to 78,192. In 2000 the median age for residents was 31, about average for city and county neighborhoods; the percentage of residents aged 19 to 34 was among the county's highest.

The median yearly household income in 2008 dollars was $29,927, considered low for the city, and high percentages of households earned $40,000 or less. Renters occupied 91.3% of the housing stock, and house- or apartment-owners held 8.7%. The average household size of three people was average for Los Angeles. The percentages of never-married women (33.3%) and men (42.6%) were among the county's highest. One-fifth of the 3,281 families were headed by single parents, a high rate for Los Angeles.

East Hollywood borders Los Feliz to the north and Silver Lake, about 4 miles from Downtown Los Angeles to the east. It also borders Wilshire Center to the south and Hollywood on the west. 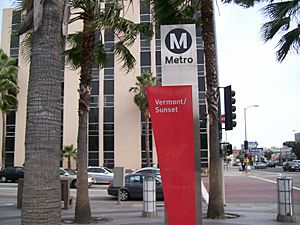 Vermont and Sunset, Children's Hospital in the background

East Hollywood is served by the Red Line subway which runs north-south along Vermont Avenue and east-west along Hollywood Boulevard.

The 101/Hollywood Freeway cuts northwest from downtown Los Angeles, through Hollywood, to the San Fernando Valley. 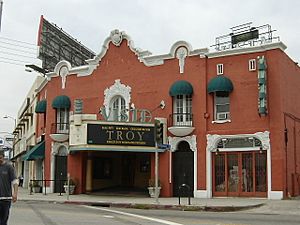 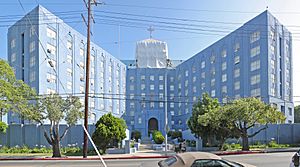 All content from Kiddle encyclopedia articles (including the article images and facts) can be freely used under Attribution-ShareAlike license, unless stated otherwise. Cite this article:
East Hollywood, Los Angeles Facts for Kids. Kiddle Encyclopedia.