Silver Lake is a residential and commercial neighborhood in the central region of Los Angeles, California. Originally named Ivanhoe in the 1900s by a resident from Scotland, it was built around what was then a city reservoir which gives the district its name. The "Silver" in Silver Lake is not because of the water's color, but named for a local politician who helped create the reservoir. The area is known for its restaurants and clubs, and many notable people have made their homes there. The neighborhood has several public and private schools.

Street and other boundaries are: the Los Angeles River between Glendale Boulevard and Fletcher Drive and Riverside Drive on the northeast, the Glendale Freeway on the east, Effie Street, Coronado Street, Berkeley Avenue and Fletcher Drive on the southeast, the Hollywood Freeway on the south, Virgil Avenue on the west and Fountain Avenue and Hyperion Avenue on the northwest. The prime real estate around the lake is known by realtors as the "Moreno Highlands."

The Silver Lake neighborhood council has mapped the boundaries of its council region.

During the 1930s, Walt Disney built his first large studio in Silver Lake at the corner of Griffith Park Boulevard and Hyperion Avenue, currently the site of Gelson's Market. As consequence, the name "Hyperion" is used by Walt Disney Company, with company entities carrying the name, such as Hyperion Books and the Hyperion Theater at Disney California Adventure Park. 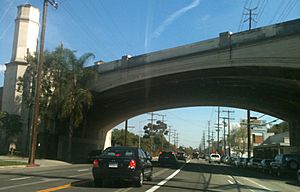 The Glendale-Hyperion Bridge in eastern Silver Lake near the I-5 freeway.

Several blocks away on Glendale Boulevard was the studio of Tom Mix. The location is now occupied by the Mixville shopping center. It is rumored that Mix buried his steed "Tony, the Wonder Horse" on the property. The neighborhood is crisscrossed by numerous municipal staircases that provide pedestrian access up and down the neighborhood's signature hills. Among these are the Descanso Stairs, Redcliffe Stairs and the Music Box Stairs. The famous flight of stairs in Laurel and Hardy's film The Music Box are located between lower Descanso Drive and Vendome Street, as it winds up and around the hill. 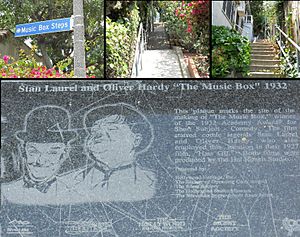 In the 1950s and 60s Silver Lake, like Echo Park, was home to a middle class Latino community. The community was formed by Latinos who worked in the then-bustling manufacturing hub of downtown Los Angeles. In the 1970s, outsourcing brought to an end the prosperity of this group, as they saw their jobs shipped overseas to Taiwan and China along with manufacturing. The neighborhood lost its prominence amid urban decay.

Beginning in the 1970s, the Silver Lake neighborhood became the nexus of Los Angeles' gay leather subculture, the equivalent of the SoMA neighborhood in San Francisco. Since the late 1990s, gentrification has changed the area by facilitating the opening of many stylish independent boutiques, coffee shops, fitness studios, and restaurants.

As of 2013, Silver Lake is represented by Los Angeles City Council Members Mitch O'Farrell and Tom LaBonge and the Silver Lake Neighborhood Council. The Silver Lake Neighborhood Council was formed in the early 2000s (decade) and certified as part of the City of Los Angeles Neighborhood Council system in February, 2003. Its 21-member Governing Board is elected for two-year terms in September. Recent projects have included "Street Medallions" created by artist Cheri Gaulke, "ArtCans", the "Electrical Art Box Project", and the second annual "Make Music LA" created by several different artists, groups, and the SLNC Arts & Culture Committee, whose current co-chairs are Charles C. Renn and Amy Clarke. 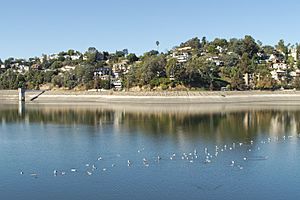 Looking west across the lower reservoir

The neighborhood was named for Water Board Commissioner Herman Silver, who was instrumental in the creation of the Silver Lake Reservoir in the neighborhood, one of the water storage reservoirs established in the early 1900s. This is one of ten that still remain in Los Angeles.

In the community of Silver Lake lies the namesake reservoir composed of two basins, with the lower named Silver Lake and the upper named Ivanhoe. The lower body of water was named in 1906 for Herman Silver, and in turn lends its name to the neighborhood. The upper body received its name after the 1819 Sir Walter Scott novel Ivanhoe.

The reservoirs are owned and maintained by the Los Angeles Department of Water and Power (DWP), and could provide water to 600,000 homes in downtown and South Los Angeles; however, only the smaller of the two, Ivanhoe, remains online. At capacity, they hold 795 million gallons of water. The Silver Lake Reservoir's water resources will be replaced by the Headworks Reservoir, an underground reservoir north of Griffith Park, slated for completion by December 2017.

Also within the grounds of the reservoir are several popular recreational facilities --- the Silver Lake Recreation Center, which includes an adjacent city park; the Silver Lake Walking Path, which circumnavigates the reservoirs (2.25 miles); and the Silver Lake Meadow, modeled after N.Y.C.'s Central Park Sheep Meadow. On the northeast corner of the property is the Neighborhood Nursery School, which since 1976 has been at the corner of Tesla Avenue and Silver Lake Boulevard. It is a parent participation cooperative preschool, affiliated with the California Council of Parent Participation Nursery Schools.

The 2000 U.S. census counted 30,972 residents in the 2.75 square miles (7.1 km2) neighborhood—an average of 11,266 people per square mile, about the same population density as in the rest of the city but among the highest in the county. In 2008 the city estimated that the population had increased to 32,890. The median age for residents was 35, about average for Los Angeles, but the percentages of residents aged 19 to 49 were among the county's highest.

The median yearly household income in 2008 dollars was $54,339, about the same as the rest of Los Angeles, but a high rate of households earned $20,000 or less per year. The average household size of 2.3 people was low for the city of Los Angeles. Renters occupied 64.3% of the housing stock, and house or apartment owners the rest.

All content from Kiddle encyclopedia articles (including the article images and facts) can be freely used under Attribution-ShareAlike license, unless stated otherwise. Cite this article:
Silver Lake, Los Angeles Facts for Kids. Kiddle Encyclopedia.