Elysian Valley, also known as Frogtown, is a neighborhood of more than 7,700 residents within Central Los Angeles, California, adjoining the Los Angeles River. It has a large percentage of children between the ages of 11 and 18 and a high number of Latinos and Asians. There is one elementary school in the neighborhood, Dorris Place Elementary School, but children have also historically attended Allesandro Elementary School.

With the announcement of the $1 Billion restoration Project for the Los Angeles River, also known as Alternative 20, many residents felt the pressure of new investment and development in the community, causing them to organize for lower density. This push for low density from within the neighborhood is not new and was documented in an article as far back as 1987.

The 2000 U.S. census counted 7,387 residents in the 0.79-square-mile neighborhood—an average of 9,354 people per square mile, about the same population density as the rest of the city. In 2008 the city estimated that the population had increased to 7,781. The median age for residents was 31, about average for Los Angeles, but the percentage of residents aged 11 to 18 was among the county's highest.

The neighborhood is moderately diverse ethnically, and the percentage of Asians and Latinos is comparatively high. The breakdown in 2000 was Latinos, 61.0%; Asians, 35.9%; whites, 9.7%; blacks, 1.1%, and others, and 2.6%. Mexico was the most common places of birth for the 47.5% of the residents who were born abroad, a high figure compared to rest of the city.

The median yearly household income in 2008 dollars was $49,013, about the same as the rest of Los Angeles. The average household size of 3.4 people was high for the city of Los Angeles. Renters occupied 52.2% of the housing stock, and house- or apartment owners 47.8%.

There is a small commercial corridor on Riverside Dr. and a few small warehouses in the background of the neighborhood adjacent to the L.A. River. 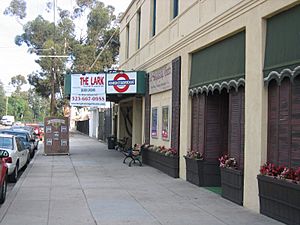 There are a few religious congregations inside of Frogtown that serve local residents. These include Catholic Church institutions and Buddhist congregations.

St. Ann's church has a significant relationship with residents, many of whom are from Jalisco. St. Ann's annually hosts a saint statue from the city of San Martín de Hidalgo, where many residents originate from.

Relation of the Frogtown neighborhood to other places, not necessarily contiguous:

All content from Kiddle encyclopedia articles (including the article images and facts) can be freely used under Attribution-ShareAlike license, unless stated otherwise. Cite this article:
Elysian Valley, Los Angeles Facts for Kids. Kiddle Encyclopedia.