Atwater Village is a highly diverse neighborhood in the 13th district of Los Angeles, California. Much of Atwater Village lies in the fertile Los Angeles River flood plain. Located in the northeast region of the city, Atwater borders Griffith Park and Silver Lake to the west, Glendale to the north and east, and Glassell Park to the south. It has three elementary schools—two public and one private. Almost half the residents were born abroad, a high percentage for the city of Los Angeles. 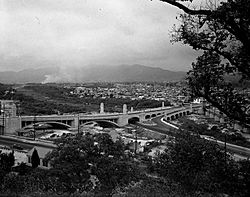 Much of Northeastern Los Angeles was part of Rancho San Rafael, until 1868, when parts of it were purchased by W.C.B. Richardson, who renamed it Rancho Santa Eulalia. The entire region was subdivided and sold to home builders in 1902, with the Atwater Village portion being named as such due to its proximity to the Los Angeles River. The area was initially named "Atwater," while the "Village" was added in 1986.

Initial residents included the newly created middle-class workers employed at the nearby DWP substation. Its location between the Los Angeles and Glendale city cores made it a highly sought after residential neighborhood beginning in the 1920s. The vast majority of the homes and structures in Atwater Village have never been demolished (although many have changed in use or have been renovated), resulting in the neighborhood having one of the highest number of structures built before 1939 in Los Angeles County.

Today, the neighborhood is among Los Angeles' most rapidly gentrifying, with an influx of young creative professionals (sometimes called "hipsters") and businesses catering to them, spilling over from the popular Silver Lake and Los Feliz areas.

The 2000 U.S. census counted 14,888 residents in the 1.78-square-mile Atwater Village neighborhood—or 8,379 people per square mile, an average population density for the city.The median age for residents was 34, about average for the city.

Much of Atwater lies in the old Los Angeles River flood plain, which resulted in deep, fertile soil.

Street and other boundary limits are the Ventura Freeway on the north, San Fernando Boulevard on the east, and the Los Angeles River on the south and west.

Atwater village is noted for its proximity to the Interstate 5, SR 134 and Interstate 110 freeways.

It also is adjacent to Metrolink Glendale Station.

All content from Kiddle encyclopedia articles (including the article images and facts) can be freely used under Attribution-ShareAlike license, unless stated otherwise. Cite this article:
Atwater Village, Los Angeles Facts for Kids. Kiddle Encyclopedia.