Glendale Transportation Center is an Amtrak and Metrolink rail station in the city of Glendale, California. It is served by the Amtrak Pacific Surfliner intercity rail route and the Metrolink Ventura County Line and Metrolink Antelope Valley Line commuter rail routes. 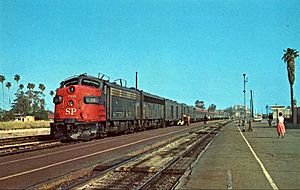 In May 1997, it was listed on the National Register of Historic Places and has recently undergone an extensive renovation.

Until April 25, 2005, the station was also served by Amtrak's Coast Starlight route.

The station also serves as a stop for Greyhound Lines buses, but there is no Greyhound ticketing kiosk or agent.

A feasibility study for a streetcar connecting with downtown is underway.

All content from Kiddle encyclopedia articles (including the article images and facts) can be freely used under Attribution-ShareAlike license, unless stated otherwise. Cite this article:
Glendale Transportation Center Facts for Kids. Kiddle Encyclopedia.