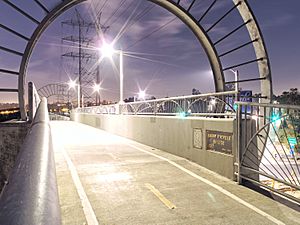 Following the Los Angeles Flood of 1938, concrete banks were created as a flood control measure for nearly all the length of the river, making it essentially navigable by bicycle to its end, where it empties into the San Pedro Bay in Long Beach. In recent years, the Friends of the Los Angeles River, a local civic and environmental group, have attempted to restore portions of the river as parkland in a manner that includes and encourages bicycle and pedestrian traffic, efforts realized in part as local Congressman Brad Sherman secured $460,000 in federal funds to extend the path north in the Sherman Oaks area. 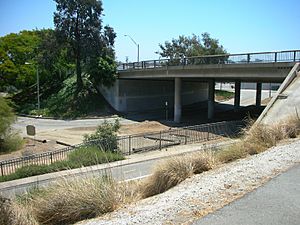 The LA River Bicycle Path consists of two main parts and other shorter sections that currently do not connect with each other along the river yet.

The Los Angeles River Revitalization Corporation (LARRC, LA River Corp) is campaigning for Greenway 2020, the completion of bike and walk paths for the entire 51-mile river by the year 2020.

The Los Angeles River Bikeway, also known as LARIO, is the longest completed section of the bicycle/pedestrian path. It runs from the Shoreline Pedestrian Bikepath at the river's mouth in Long Beach, upstream to the industrial area southeast of Downtown Los Angeles, at Atlantic Boulevard in Vernon.

In Long Beach, the bike path runs on the east side of the river channel. When the path intersects with Imperial Highway, it crosses the LA River on the road bridge and continues north on along the west side of the LA River to Vernon. The path on the east side continues under the bridge to the confluence with the Rio Hondo, becoming the Rio Hondo Bicycle Path heading northeast to the Whittier Narrows Recreation Area.

Mileage markers are painted on the pavement and signs are posted at regular intervals detailing upcoming city streets. Parking can be found at Hollydale Park in South Gate, Ralph C. Dills Park in Paramount, and DeForest Park in Long Beach. Other access in Long Beach includes several street crossings of the river, including those of Pacific Coast Highway, Willow Street, Wardlow Road, and Del Amo Boulevard. 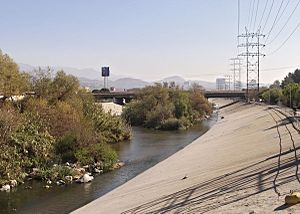 In the San Fernando Valley there are several other non-connected sections.

From the headwaters in Canoga Park into Winnetka, A new section is under construction in Reseda to continue it eastward.

The Arroyo Seco Bicycle Path is in the Arroyo Seco river channel, upstream from its confluence with the Los Angeles River. It runs from Montecito Heights northeast to South Pasadena.

The Browns Creek Bike Trail runs along Browns Canyon Wash in Chatsworth, at the foot of the Santa Susana Mountains in the northwestern San Fernando Valley.

The Compton Creek Bike Path is in Compton, along the east bank of two sections of Compton Creek, a tributary of the lower Los Angeles River. The northern section of the path is a paved trail extending from El Segundo Boulevard south through residential neighborhoods to Greenleaf Boulevard. An equestrian trail runs along the west bank of the creek.

A shorter section of paved trail exists farther south along the creek, but it is separated by the LA Metro A Line tracks, the Gardena Freeway, and the east fork of Compton Creek. Access to this southern segment is only at a few large streets, and it ends at Del Amo Boulevard north of the confluence of Compton Creek and the Los Angeles River.

The Dominguez Channel Bicycle Path/Laguna Dominguez Bicycle Trail is along a 2.8 miles (4.5 km) section of the Upper Dominguez Channel, a 15.7 miles (25.3 km) long channelized stream west of the lower Los Angeles River in southern Los Angeles County. It runs between the community of Alondra Park near El Camino College and Hawthorne near the Hawthorne Airport. It is a project of the city of Hawthorne's Dominguez Enhancement and Engagement Project (D.E.E.P) It has numerous mid-block crossings with cross walk navigation, and offers good pedestrian access. Periodic mile markers painted on the pavement indicating distances upstream from its mouth at the Port of Los Angeles.

On July 23, 2013, the nonprofit group River LA, formerly known as Los Angeles River Revitalization Corp, announced a goal of completing a continuous 51-mile greenway and bike path along the river by the end of the decade. The path is envisioned to be the central focus of a linear recreational park as well as providing an alternative transportation path through Los Angeles. The announcement by the nonprofit group precedes the expected August 30 release of a feasibility study being prepared by the U.S. Army Corps of Engineers. The Corps have the ultimate decision-making power over the river and its future revitalization.

All content from Kiddle encyclopedia articles (including the article images and facts) can be freely used under Attribution-ShareAlike license, unless stated otherwise. Cite this article:
Los Angeles River bicycle path Facts for Kids. Kiddle Encyclopedia.