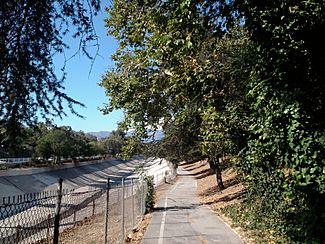 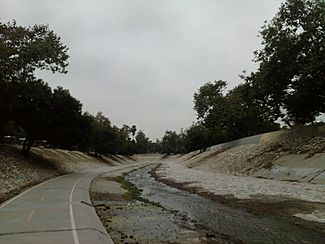 The southwest portion of the path, approximately 0.25 miles (0.40 km), runs along the top of the channel and overlooks the Arroyo Seco through chain-link fencing. It then descends into the bed of Arroyo Seco flood control channel for the rest of the route. Following the channel hydraulics, there is a slight and consistent uphill grade in the northeast/upstream direction, with some sections under overpasses having slightly greater slopes.

For flood safety reasons, if rain is predicted or if water release is expected from the upstream dam, public access is not permitted in the channel.

The path continues as a walking and equestrian trail from its northern terminus, with only pedestrians and horses allowed beyond the Arroyo Seco Stables. However, bicyclists can continue on the Kenneth Newell Bikeway along Arroyo Boulevard just to the east, a quiet residential street that continues north in the Arroyo Seco to the Rose Bowl Stadium in Pasadena.

From the path's southern terminus, the open air Heritage Square Museum and the Lummis House and gardens are nearby. Connections southwards to the Los Angeles River Bicycle Path several miles away are via the vehicle shared Figuroa Street to Riverside Drive.

Especially after rain events, storm-borne debris accumulate on the path and pose danger to cyclist and pedestrians. Other hazards include trash and debris, such as beverage bottles, shopping carts, and electronics that are being illegally discarded into the channel from bridge overpasses. Due to periodical maintenance activities, the path is usually clear from any debris and provides an enjoyable recreational area.

All content from Kiddle encyclopedia articles (including the article images and facts) can be freely used under Attribution-ShareAlike license, unless stated otherwise. Cite this article:
Arroyo Seco bicycle path Facts for Kids. Kiddle Encyclopedia.