South Pasadena is a city in Los Angeles County, California, United States. As of the 2010 census, it had a population of 25,619, up from 24,292 at the 2000 census. It is located in the West San Gabriel Valley. It is 3.42 square miles in area and lies between the much larger City of Pasadena, of which it was once a part, and the metropolis of Los Angeles. South Pasadena is the oldest self-builder of floats in the historic Tournament of Roses Parade.

The original inhabitants of South Pasadena and surrounding areas were members of the Native American Hahamog-na tribe, a branch of the Tongva Nation (part of the Shoshone language group) that occupied the Los Angeles Basin. The Tongva name for the area that covers modern day South Pasadena and much of Alhambra was Vaytsuung'xuilhoor pronounced /ʋaitsyŋ sʐuilχøɛr/. Tongva dwellings lined the Arroyo Seco (Los Angeles County) in South Pasadena and south to where it joins the Los Angeles River and along other natural waterways in the city. They lived in thatched, dome-shape lodges characteristic for their use of carved wood decorations in the Nava style. For food, they lived on a diet of corn meal, seeds and herbs, venison, berries, fruits and other small animals. They traded for ocean fish with the coastal Tongva on a daily basis. They made cooking vessels from steatite soapstone from Catalina Island. South Pasadena also has a strong claim to having the oldest and most historic sites in the San Gabriel Valley. For many centuries, its adjacency to a natural fording place along the Arroyo Seco had served as a gateway to travel and commerce for aboriginal peoples here and along the coast. It was here that Hahamognas greeted Portola and the missionaries who later established the San Gabriel Mission a few miles to the east.

The initial buildings on the Rancho San Pascual were built on the land which eventually became the cities of Pasadena, South Pasadena and Altadena. The first of these adobe structures became headquarters for General Flores and his staff in 1847 where they agreed to surrender to American forces, ending Mexican Colonial rule in California. In 1875 the landowners of the area encompassing present-day Pasadena and South Pasadena voted to rename their association, Pasadena.

South Pasadena's first mayor was Donald McIntyre Graham. In February 1888, members of the southern portion of Pasadena attempted to gain more control over their own property and a vote for incorporation was made. In 1888, South Pasadena incorporated the southern portion of the Indiana Colony and land south and eastward to the Los Angeles border. Few Tongva had received any land. On 2 March 1888, the city of South Pasadena was incorporated with a population slightly over 500 residents, becoming the sixth municipality in Los Angeles County. It was chartered with roughly the same area as the current South Pasadena, about 3.42 square miles (8.91 square kilometers). With completion of the Pacific Electric Short Line, putting the entire city within easy walking distance of the “red car” stations, South Pasadena also became one of the first suburbs of Los Angeles.

South Pasadena's history is associated with that of the Cawston Ostrich Farm and the Fair Oaks Pharmacy and Soda Fountain, which played vital roles in the history of the city.

South Pasadena's streets are lined with numerous species of native California trees. These include redwood, sequoia, ash, walnut, and sycamore. Some non-native trees, such as sweetgum, are also seen. Because there are very few stucco-clad Spanish Colonial houses and virtually no palm trees in some parts of the city, South Pasadena is a popular stand-in for Midwestern and Northeastern towns in motion picture and television productions. South Pasadena sits less than 10 miles (16 km) from Downtown Los Angeles; substantial numbers of residents work either in Bunker Hill or as professors and staff at the University of Southern California.

"Mom and Pop" merchants populate the business district, and the Mission West area is a part of the original U.S. Route 66. Of historical relevance is The Fair Oaks Pharmacy and Soda Fountain; also the Rialto Theater in downtown South Pasadena is a unique blend of Spanish Baroque and Egyptian stylings and was built in 1925. It is one of the last remaining single screen cinemas in the country. The Rialto was added to the National Register of Historic Places in 1978, having narrowly missed being torn down that year. It went out of business on August 19, 2007 because of low profits. It has been featured in many films and commercials, most notably Robert Altman's The Player and more recently in La La Land.

The Farmer's Market has become a tradition in the historic Mission-West District of South Pasadena on every Thursday from 4pm to 8pm. On the first Saturday of December every year, South Pasadena Booster Club hosts an annual 5K/10K run around South Pasadena known as the "Tiger Run", after the SPHS mascot. Racers from kindergarten to age 80 are invited to participate, including a wheelchair event. The 5K is run on flat sidewalks and roads around town, but the 10K (6.2 miles) includes some difficult hills. There is also a 300-meter children's run for kids 10 and under.

South Pasadena can often be seen in motion picture productions with its beautiful tree-lined streets and "anywhere in America" feel. Such movies as Freaky Friday, The Terminator, Gone with the Wind, Halloween, Pee-Wee's Big Adventure, American Pie, The Girl Next Door, Legally Blonde, 13 Going on 30, Back to the Future, Mr. Deeds, Bruce Almighty, Old School, The Ugly Truth, and License to Wed are just a few of the notable films shot on location in South Pasadena. Notable television series that have been filmed there include Parenthood, Family, Boston Public, Nip/Tuck, Desperate Housewives, Cold Case, Bones, Modern Family, No Ordinary Family, Big Love, and CSI: Crime Scene Investigation. 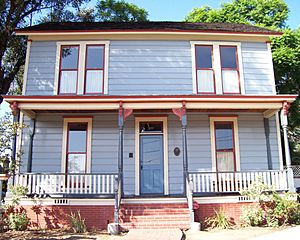 The house used in the film Halloween on Mission Street in South Pasadena.

Diagram showing South Pasadena's location in relation to other cities in a 8-kilometer (5.0 mi) radius.

According to the 2010 United States Census, South Pasadena had a median household income of $85,058, with 6.7% of the population living below the federal poverty line.

The Arroyo Seco (canyon, stream, and cultural landscape) offers a diverse range of experiences for walkers and more experienced hikers.

The Arroyo Seco stream begins at Red Box near Mount Wilson in the San Gabriel Mountains and proceeds through steep mountain canyons for eleven miles (18 km) until it enters the urban plain of Southern California at the Jet Propulsion Laboratory. The stream, largely channelized south of Devil's Gate Dam, proceeds in the Arroyo Seco canyon for eleven miles (18 km) more: through Pasadena, South Pasadena and Northeast Los Angeles to the confluence with the Los Angeles River near Elysian Park, Chinatown and downtown Los Angeles.

All content from Kiddle encyclopedia articles (including the article images and facts) can be freely used under Attribution-ShareAlike license, unless stated otherwise. Cite this article:
South Pasadena, California Facts for Kids. Kiddle Encyclopedia.