San Marino is a city in Los Angeles County, California, United States. Incorporated on April 12, 1913, the city was designed by its founders to be uniquely residential, with expansive properties surrounded by beautiful gardens, wide streets, and well maintained parkways. The city is located in the San Rafael Hills. The population was 13,147 at the 2010 census.

The city takes its name from the ancient Republic of San Marino, founded by Saint Marinus who fled his home in Dalmatia (modern Croatia) at the time of the Diocletianic Persecution of Christians. Marinus took refuge at Monte Titano on the Italian peninsula, where he built a chapel and founded a monastic community in 301 A.D.. The state which grew from the monastery is the world's oldest surviving republic.

The seal of the City of San Marino, California is modeled on that of the republic, depicting the Three Towers of San Marino each capped with a bronze plume, surrounded by a heart-shaped scroll with two roundels and a lozenge (of unknown significance) at the top. The crown representing the monarchy on the original was replaced with five stars representing the five members of the City's governing body. Beneath the city's seal are crossed palm fronds and orange branches.

The city celebrated its centennial in 2013, including publication by the San Marino Historical Society of a 268-page book, San Marino, A Centennial History, by Elizabeth Pomeroy. In September 2014, this book and author Elizabeth Pomeroy received a prestigious Award of Merit for Leadership in History from the American Association for State and Local History (AASLH).

The site of San Marino was originally occupied by a village of Tongva (Gabrieleño) Indians located approximately where the Huntington School is today. The area was part of the lands of the San Gabriel Mission. (The "Old Mill" was the Mission's grist mill.) Principal portions of San Marino were included in an 1838 Mexican land grant of 128 acres to Victoria Bartolmea Reid, a Gabrieleña Indian. (After her first husband, also a Gabrieleño, died in 1836 of smallpox, she remarried Scotsman Hugo Reid in 1837). She called the property Rancho Huerta de Cuati. After Hugo Reid's death in 1852, Señora Reid sold her rancho in 1854 to Don Benito Wilson, the first Anglo owner of Rancho San Pascual. In 1873, Don Benito conveyed to his son-in-law, James DeBarth Shorb, 500 acres (2.0 km2), including Rancho Huerta de Cuati, which Shorb named "San Marino" after his grandfather's plantation in Maryland, which, in turn, was named after the Republic of San Marino located on the Italian Peninsula in Europe.

In 1903, the Shorb rancho was purchased by Henry E. Huntington (1850–1927), who built a large mansion on the property. The site of the Shorb/Huntington rancho is occupied today by the Huntington Library, which houses a world-renowned art collection, research and rare-book library, and botanical gardens. In 1913 the three primary ranchos of Wilson, Patton, and Huntington, together with the subdivided areas from those and smaller ranchos, such as the Stoneman, White, and Rose ranchos, were incorporated as the city of San Marino.

The first mayor of the city of San Marino was George Smith Patton (1856-1927). The son of a slain Confederate States of America colonel in the U.S. Civil War, (also named George Smith Patton, 1833-1864), Patton graduated from the Virginia Military Institute in 1877, just before moving west. He married Ruth Wilson, the daughter of Don Benito Wilson. Their son was the World War II general, George S. Patton, Junior.

To a prior generation of Southern Californians, San Marino was known for its old-money wealth and as a bastion of the region's WASP gentry. By mid-century, other European ethnic groups had become the majority; in recent decades, immigrants of Chinese and Taiwanese ancestry have come to represent more than 60% of the population, perhaps due to its location in the San Gabriel Valley, known to be a popular destination for East Asian immigrants. 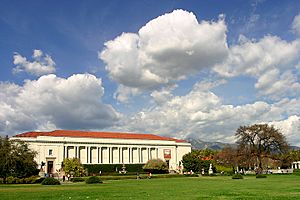 Huntington Library, in a landscape setting by Beatrix Farrand 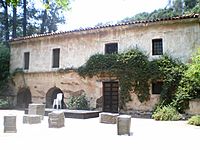 View of the Old Mill from rear courtyard

El Molino Viejo ("The Old Mill"), completed about 1816 as a grist mill for Mission San Gabriel Arcángel, is in San Marino. The original two-story structure measured 53 feet (16 m) by 26 feet (7.9 m). It is the oldest commercial building in Southern California. The town is located on the former lands of the historic Rancho Huerta de Cuati.

The Edwin Hubble House: From 1925 to 1953, this two-story stucco home was the residence of one of America's greatest 20th-century astronomers, Edwin Hubble, who, among other accomplishments, discovered extragalactic nebulae and their separation from each other. It is a National Historic Landmark.

The Michael White Adobe House, is located on the high school campus and houses the San Marino Historical Society archives. 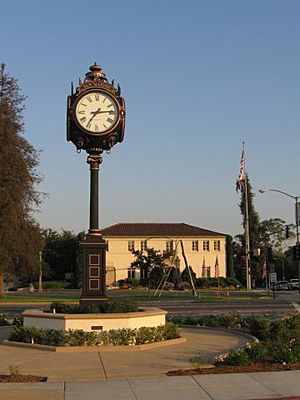 Across from City Hall is the Centennial Clock, standing at the northeast corner of Huntington Drive and San Marino Avenue, donated to the community in 2005 by the Rotary Club of San Marino in celebration of Rotary International's 100th anniversary. Dedicated on July 4, 2005, the nineteen foot high clock includes a time capsule with artifacts donated by residents and community organizations which is to be opened on July 4, 2039 to mark the 100th anniversary of the Rotary Club of San Marino.

In the middle of San Marino lies Lacy Park, a 30-acre (120,000 m2) expanse of grass and trees. Originally named Wilson Lake in 1875, the land was purchased by the city in 1925 and dedicated as a park. Families in San Marino have enjoyed the park for years. A picnic area is often the site of musical concerts, civic events and pancake breakfasts. Within the park are two walking loops: an inner loop of approximately 3/4 mile in length, and an outer loop of approximately 1-mile (1.6 km) in length. Dogs are welcome with their owners, providing they are on a leash. In recent years, proposals from SMHS alumni Brent and Derek Barker to build a dedicated dog park on the unlandscaped western edge of the park have been shelved due to strident opposition from some of the city's elderly residents. The park includes six championship tennis courts and a pro shop, administered by the San Marino Tennis Foundation. At the west entrance of the park is the Rose Arbor, which is of special significance for the people of San Marino. It is sixty years old and has long been a source of beauty and tranquility to many residents. In recent years the care and upkeep of the Rose Arbor itself has been augmented by private donations from residents who have chosen to sponsor individual posts. The park recently built a memorial to General George S. Patton (a native of San Marino) and also a large memorial to the Armed Forces along with a statue of a sad soldier. The memorial includes the names of all military personnel from San Marino.

The city's local newspaper office is located near the city's most prominent street, Huntington Drive. "The San Marino Tribune" has been the official newspaper of the city since 1929. There are two sections of the weekly paper, an "A" section and a "B" section, the distinction being that it covers not only San Marino news but also the Pasadena, San Gabriel, Alhambra, Arcadia and South Pasadena news.

According to the 2010 United States Census, San Marino had a median household income of $131,758, with 5.4% of the population living below the federal poverty line.

There were 4,266 households out of which 42% had children under the age of 18 living with them, 75% were married couples living together, 8.6% had a female householder with no husband present, and 13.9% were non-families. Of all households 12% were made up of individuals and 7.3% had someone living alone who was 65 years of age or older. The average household size was 3.03 and the average family size was 3.29.

The city is divided into seven zones, based on minimum lot size. The smallest lot size is about 4,500 square feet (420 m2), with many averaging over 30,000 square feet (2,800 m2). Because of this and other factors, most of the homes in San Marino, built between 1920 and 1950, do not resemble the houses in surrounding Southern California neighborhoods (with the exception, perhaps, of neighboring portions of Pasadena). San Marino has also fostered a sense of historic preservation among its homeowners. With minor exceptions, the city's strict design review and zoning laws have thus far prevented the development of large homes found elsewhere in Los Angeles.

According to the United States Census Bureau, the city has a total area of 3.8 square miles (9.8 km2), virtually all land.

San Marino is highly restrictive of commercial operations in the city. It is one of the few cities that requires commercial vehicles to have permits to work within the city. The rationale is that commercial vehicle operators and service providers, such as gardeners, pool service providers and maintenance workers, are more likely to cause social disruption within the city, and so must be preauthorized for crime control and prosecutorial purposes. This regulation and others, including the bans on apartment buildings, townhouses and overnight parking, are some of the more obvious examples.

The city is currently served by the San Marino Police Department. The current police chief is John Incontro.

The Crowell Public Library, opened in 2008, is the site of many and varied activities. Lectures, workshops, storytimes, and an assortment of classes, including those on health related issues, are offered at the library. Hours: Mon-Thurs 10-9, Fri - Sat 10-5, Sun 1-5

All content from Kiddle encyclopedia articles (including the article images and facts) can be freely used under Attribution-ShareAlike license, unless stated otherwise. Cite this article:
San Marino, California Facts for Kids. Kiddle Encyclopedia.