Angelino Heights is one of the oldest neighborhoods in Los Angeles, California, situated within neighboring districts of Chinatown and Echo Park. This neighborhood is known for its concentration of eclectic architectural styles from three eras: The Victorian, Turn of the Century and Revival eras.

Angelino Heights is bordered by Westlake on the south, Echo Park proper on the west and the north-west, and Elysian Park neighborhood on the east and north-east. Its boundaries are roughly Echo Park Avenue on the west, Sunset Boulevard on the north and east, and the Hollywood Freeway on the south. No major thoroughfares run through the district. 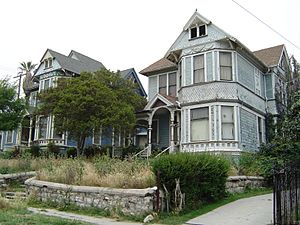 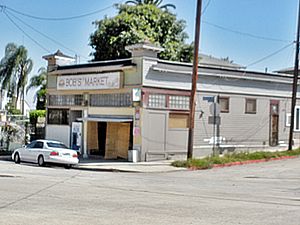 Bob's Market, a historic-cultural monument (No. 215)

Originally spelled Angeleno Heights, Angelino Heights is second only to Bunker Hill as the oldest district in Los Angeles. Founded in 1886, it was originally connected to the downtown mainline (which ran east to west on Temple Street) by the Temple Street Cable Railway and later by streetcars. Like Echo Park proper and Chinatown, it is known for its steep hills. The district contains many notable examples of Victorian architecture, particularly of the Eastlake and Queen Anne styles, and though found throughout the neighborhood, they are especially concentrated on Carroll Avenue. Two of these residences served as the houses used for the TV shows Charmed and Journeyman, used in the shows as San Francisco Victorian residences, and because of the picturesque nature of the neighborhood, they have served as the backdrop for countless motion pictures from the earliest days of cinema to the present. Traveling around the neighborhood, one also discovers that many other styles of architecturally significant homes are to be found here, such as Craftsman, Bungalow, Mission Revival, Art Deco, and Colonial Revival, to name a few.

A large swath of Angelino Heights was destroyed to build the Hollywood Freeway, which cut it off from Temple Street save an overpass at Edgeware Road. 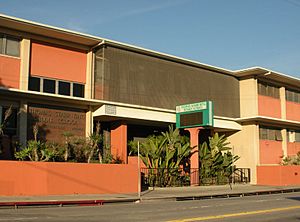 All residents are zoned to Plasencia Elementary School or Logan Elementary.

All residents are zoned to Belmont High School.

All content from Kiddle encyclopedia articles (including the article images and facts) can be freely used under Attribution-ShareAlike license, unless stated otherwise. Cite this article:
Angelino Heights, Los Angeles Facts for Kids. Kiddle Encyclopedia.