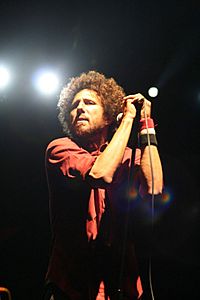 Zack de la Rocha (born January 12, 1970) is the lead singer of American rock band Rage Against the Machine. He was born in Long Beach, California.

Zack was interested in punk rock- including bands such as the Sex Pistols and the Clash- from a young age. In seventh grade, Zack played guitar in a punk band called Juvenile Expression, along with his friend Tim Commerford, who played bass. As a teenager, Zack grew to like hardcore punk bands such as Minor Threat and Fugazi, and joined Hardstance as a guitarist. In 1988, Hardstance changed it's name to Inside Out, and Zack became vocalist. Inside Out broke up in 1991. In August of that year, while performing in a club, Zack was approached by Los Angeles local musicians Tom Morello, a guitarist, and Brad Wilk, a drummer and the three agreed to form a band called Rage Against the Machine, which was the name of a song Zack had written when he was vocalist. De la Rocha asked former Juvenile Expression bandmate Tim Commerford to play bass, and he agreed.

As a teenager, de la Rocha became a vegetarian for ethical reasons

Zack wrote most of Rage Against the Machine's songs, with lyrics that talked about politics and current events. The band signed with Epic Records in 1992 and released three original albums between 1992 and 1999- Rage Against the Machine in 1992, Evil Empire in 1996, and The Battle of Los Angeles in 1999. Zack left the band in October, 2000 for "political and creative differences". A fourth album, Renegades, was released in December.

On January 22, 2007, it was announced that RATM would reunite to play a show in Coachella, California. Since then, the band has been active in political causes and is planning to release a new album in 2011.

All content from Kiddle encyclopedia articles (including the article images and facts) can be freely used under Attribution-ShareAlike license, unless stated otherwise. Cite this article:
Zack de la Rocha Facts for Kids. Kiddle Encyclopedia.