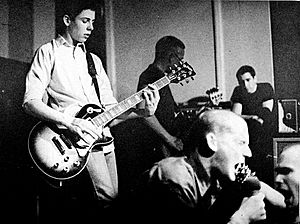 Minor Threat told their listeners they did not use illegal drugs or drink alcohol, which was called being "straight edge."

Ian MacKaye, Jeff Nelson, bassist Brian Baker, and guitarist Lyle Preslar formed Minor Threat in 1980. Their first records were Minor Threat and In My Eyes in 1981. The group toured through the United States.

Their song "Straight Edge" had lyrics (words) that told people they did not use illegal drugs or drink alcohol, which was called being "straight edge." Another song called "Out of Step" tells listeners not to smoke, drink, or have casual sex. People often thought that the band was telling others not to do these things but in interviews the band states that straight edge is a personal decision.

All content from Kiddle encyclopedia articles (including the article images and facts) can be freely used under Attribution-ShareAlike license, unless stated otherwise. Cite this article:
Minor Threat Facts for Kids. Kiddle Encyclopedia.