Hardcore punk (or hardcore) is a style of punk music that usually sounds louder, faster and more angry than earlier punk rock music from the 1970s. Hardcore began in the late 1970s. Some of the important bands of the genre are Bad Brains, Black Flag, D.O.A, Minor Threat and Cro-Mags. Hardcore songs often have more political lyrics (words) than songs from 1970s punk.

No one is quite sure where the term "hardcore punk" came from. The band D.O.A. may have helped to make the term more popular with the title of their album Hardcore '81 in 1981.

The first hardcore punk song was "Out of Vogue" by the Santa Ana band The Middle Class. This band started to play a loud type of punk with shouted words.

At hardcore punk concerts, people did a type of dancing called moshing. This type of dance involves people pushing each other and jumping off the stage.

In the early 1980s, hardcore bands from England began to get noticed, such as Discharge, The Exploited, and The Varukers. Discharge played with a sound that included heavy metal guitar styles.

Hardcore led to the creation of the straight edge movement. People who are straight edge do not use alcohol, tobacco, and other drugs. Straight edge led to two new groups, called hardline and youth crew. Hardcore musicians also created independent record labels in the 1980s.

Many bands had a "Do it Yourself" (DIY) attitude. Bands would record their own albums using simple four-track recorders, and the sell the records themselves at shows or through the mail. Hardcore influenced the creation of new styles of music, including alternative rock, grunge, alternative metal, metalcore, thrash metal and post-hardcore. 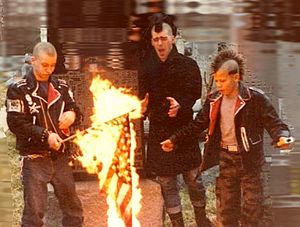 Punk fans burning a United States flag in the 1980s.

Many early hardcore punk bands had songs about liberal politics such as anarchism and socialism. They spoke against political leaders, such as American president Ronald Reagan and British prime minister Margaret Thatcher. While George W. Bush was President of the United States, a number of hardcore bands criticized him. A small number of hardcore musicians have expressed right wing views, including the band Antiseen, whose guitarist Joe Young ran for office as a Libertarian in North Carolina. Former Misfits singer Michale Graves supported George W. Bush.

Hardcore band singers often sing by shouting the words of the song. Hardcore songs often sound like the singer is angry.

The drums in hardcore music play loud and fast, often characterized by use of the double-bass pedal, particularly notable in the breakdowns.

All content from Kiddle encyclopedia articles (including the article images and facts) can be freely used under Attribution-ShareAlike license, unless stated otherwise. Cite this article:
Hardcore punk Facts for Kids. Kiddle Encyclopedia.