The unincorporated area known as City Terrace occupies the northern part of the East L.A. CDP.

According to the 2010 United States Census, East Los Angeles had a median household income of $37,982, with 26.9% of the population living below the federal poverty line.

There were 29,844 households out of which 51.7% had children under the age of 18 living with them, 53.1% were married couples living together, 21.7% had a female householder with no husband present, and 16.0% were non-families. 12.5% of all households were made up of individuals and 6.4% had someone living alone who was 65 years of age or older. The average household size was 4.15 and the average family size was 4.42.

Latino communities These were the ten cities or neighborhoods in Los Angeles County with the largest percentage of Latino residents, according to the 2000 census: 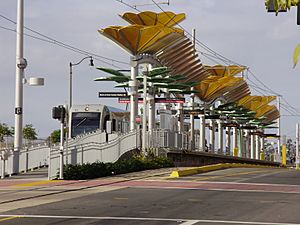 Light rail service to East L.A. is provided by the Metro Gold Line's Eastside Extension, which opened in 2009.

The Walk of Fame is similar to the one in Hollywood, but with a focus on Latino celebrities. The Latino Walk of Fame was inaugurated on April 30, 1997 to honor outstanding leaders who have made historical and social contributions with a Sun Plaque on Whittier Boulevard the heart of East L.A.. Spaces have been created for over 280 plaques. Permanent granite plaques have been put in place for the first 20 honorees. The merchants’ association of East Los Angeles sponsors a Comprehensive Clean-Up Campaign that cleans the sidewalks and gutters daily and removes litter and trash. [1]

East Mexican Independence Day Parade and Festival starts the parade at 10:30am. The 1 1/2-mile East LA Parade route begins at the corner of Cesar Chavez Ave. and Mednik Ave. The parade travels north on Cesar Chavez, it goes in front of ABC Chanel 7 and Univision Television Network Live Recoding, then turns east onto Gage Ave. The parade participants turn south onto 1st returning to the Grand Festival on Mednik and 1st.

The East Los Angeles Farmers Market opened in November 2006 located in the East LA Civic Center (By East LA Library), every Saturday from 9:00am to 2:00 pm.

The obelisk-shaped monument at Atlantic Park was dedicated on May 30, 1930 during a Memorial Day Parade that ended at what was then called Belvedere Gardens Park. A plaque on the monument reads, "In memory of heroes of all American wars." According to a Los Angeles Times story at the time, over 2,000 ex-service men and members of service clubs marched in the parade. Orval C. Jordan and Millard F. Durham, who donated the monument, were both veterans, said Ansley Davies, a curator with the Los Angeles County Department of Parks. Both lived near the park, according to U.S. Census records.

Atlantic Avenue Park in the CDP has a children's play area, picnic and barbecue areas, a men's locker room, a women's locker room, and a 50 meter, six lane swimming pool. In addition the park has a rose garden maintained by volunteers. The 39.1-acre (15.8 ha) Belvedere Community Regional Park is located adjacent to and outside of the CDP. The park has baseball fields, basketball courts, a children's play area, a community room, a fitness zone, a gymnasium, picnic shelters, a skate park, soccer (football), a splash pad, a swimming pool, and tennis courts.

The 8.4-acre (3.4 ha) Ruben F. Salazar Memorial Park is in the CDP. The county purchased the original 1.47 acres (0.59 ha) of park property from Cedars of Lebanon Hospital on March 8, 1938. The land was officially designated as the "East Los Angeles Playground" two months later. On June 25, 1940 the property was renamed the "Laguna Park and Playground." On September 17, 1970 the Los Angeles County Board of Supervisors gave the park its current name. The park was named after Ruben F. Salazar, a Los Angeles Times columnist and an executive at KMEX. Salazar Park includes a baseball diamond, basketball courts, a children's play area, a community room, a computer center, a gymnasium, picnic shelters, a senior center, a swimming pool, and tennis courts. The 4.8-acre (1.9 ha) Saybrook Park is also in the CDP. The County Board of Supervisors approved final plans for developing the park on May 1, 1973. The park includes two outdoor basketball courts, a ball diamond, children's play areas, a community building with a community room, a computer technology building with a computer room, picnic and barbecue areas, and a tennis court.

The Eastside Eddie Heredia Boxing Club, operated by the county, is located inside a former fire station in the CDP. The club was named after Eddie Heredia, the first club of the champion, who died of leukemia at age 17. One of the members of the Heredia club became a member of the United States Olympic Boxing Team and entered the 2008 Beijing Olympics.

As with the surrounding region, East L.A. has a Mediterranean climate.

All content from Kiddle encyclopedia articles (including the article images and facts) can be freely used under Attribution-ShareAlike license, unless stated otherwise. Cite this article:
East Los Angeles, California Facts for Kids. Kiddle Encyclopedia.