Montebello (Spanish and Italian for beautiful mountain) is a city in Los Angeles County, California, United States, located in the southwestern area of the San Gabriel Valley on 8.4 sq mi (22 km2) 8 mi (13 km) east of downtown Los Angeles. It is considered part of the Gateway Cities, and is a member of the Gateway Cities Council of Governments. In the early 20th century, Montebello was a well-known source for oil reserves. At the 2010 census, the population was 62,500. The estimated population as of July 1, 2013 was 63,495.

Before the arrival of the Spaniards in the area known today as Montebello, the land along the Rio Hondo River was populated by the Tongva (Gabrielino) portion of the Uto-Aztecan family of Native Americans. The Tongva occupied much of the Los Angeles basin and the southern Channel Islands - Santa Catalina, San Nicolas, San Clemente and Santa Barbara; when Spanish explorer Juan Rodrigues Cabrillo arrived off the shores of Santa Catalina in 1542, he was met by the Tongva people. Because the language of the Tongva was different from the neighboring tribes it was called "Gabrielino" by the Spanish. As more non-natives arrived and settlements were established, illness and disease came with them. By 1870, the area had few remaining indigenous inhabitants as disease brought by the Europeans killed many of the Tongva.

Father Angel Somera and Father Pedro Cambon, both Franciscan missionaries, founded the original Mission San Gabriel Arcangel on September 8, 1771; the location is today near the intersection of San Gabriel Boulevard and the Rio Hondo River. The establishment of the mission marked the beginning of the Los Angeles region's settlement by Spaniards and the fourth of twenty-one missions ultimately established along California's El Camino Real. The mission did well initially as a farm and cattle ranch. Six years after its founding, however, a destructive flood led the mission fathers to relocate the establishment farther north, to its current location in what is the present day city of San Gabriel. The original mission site is now memorialized as California Historical Landmark #158.

On January 8, 1847, the Battle of Rio San Gabriel took place in what are today parts of the cities of Whittier, Pico Rivera and Montebello. The battle was a decisive victory for the U.S. Army, giving control of Los Angeles and Alta California to the United States, and is viewed by historians as a critical juncture in the Mexican-American war. Today the site is California State Historical Landmark #385; and there are two cannons and a plaque commemorating the battle that overlook the river on Bluff Road and Washington Boulevard.

Following the American Civil War, some 5,000 acres (2,000 ha) of the East Los Angeles area was owned by Alessandro Repetto, an Italian immigrant settler from Genoa, Italy. Following Repetto's death in 1885, his brother sold his rancho to a consortium of five Los Angeles businessmen including banker Isaias Hellman and wholesale grocer/historian Harris Newmark for $60,000, approximately $12 per acre. The land was later divided among the partners, one large parcel of approximately 2,000 acres (810 ha) going to a partnership of Newmark and his nephew, banker Kaspare Cohn. It was out of the Newmark and Cohn share of 1,200 acres (490 ha) that city Montebello had its beginnings in May 1899. After receiving the advice of hydraulic engineer William Mulholland for the drafting and building of the town's water system, the land was subdivided. In 1900 the completed water system was incorporated as the Montebello Land and Water Company.

An area of 200 acres (81 ha) adjacent to the tracks of what was formerly the San Pedro, Los Angeles & Salt Lake Railroad was developed into a townsite called Newmark, bounded by Los Angeles Avenue on the south, 1st Street on the east, Cleveland Avenue on the north, & 5th Street on the west. The remainder of the land was subdivided into 5 acres (2.0 ha) lots suitable for small-scale agriculture. On Mulholland's suggestion, Montebello was adopted as the city's name, replacing the original name Newmark.

Originally an agricultural community, Montebello was formerly known for its prolific production of flowers, berries, fruits, and vegetables. The first public flower show was sponsored by the Montebello Women’s Club and held in the Montebello High School auditorium on Whittier Boulevard in 1912. The Montebello – El Carmel (South Montebello) Improvement Association, the predecessor of the Montebello Chamber of Commerce, operated from September 1907 to April 1912. with its stated purpose "to improve and beautify the community." Some of its early achievements included: seeing Whittier Boulevard paved, trees planted along the streets, establishment of the city's first high school, working to drop the name of "Newmark" and having the entire area incorporated as "The City of Montebello". On October 19, 1920, the city was incorporated and its name officially changed to "Montebello". In honor of Montebello's agricultural roots, the city's official seal contains a red poinsettia in the center. much of south Montebello,was populated by Japanese American farmers who would lose their property during the WW II internment of US citizens. many of the displaced residents were unable to return to their homes. Citation Executive Order 1066 . The Family of M's Flowers can trace their history and participation In the growth of the all flower industry, largely through their efforts. The Standard Oil Company discovered oil in the Montebello hills in 1917 on the Baldwin and Temple properties; this discovery changed the face of Montebello. What were formerly hills full of agriculture became oil fields. Eventually, the oil taken from the soil in Montebello would produce one-eighth of the crude-oil in California. Over the course of sixty years, the Montebello hills were filled with producing oil wells.

According to the 2010 United States Census, Montebello had a median household income of $47,488, with 15.4% of the population living below the federal poverty line.

There were 18,844 households out of which 40.2% had children under the age of 18 living with them, 51.5% were married couples living together, 20.1% had a female head of household and 21.1% were unrelated individuals. 17.1% of all households consisted of a single individual and 8.0% had persons who were 65 years of age or older living alone. The average household size was 3.28 and the average family size was 3.67. 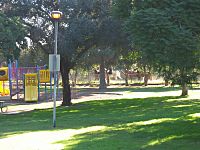 Horses on the trails

The Montebello Parks and Recreation Division provides recreational services for all age groups, from small children to the growing senior citizen community. Their Mission Statement is: "Creating Community Through People, Parks & Recreation".

Montebello Municipal Golf Course's history that dates back to 1928, when it was built as an enterprising country club designed by golf course architect Max Behr. The city purchased the course in 1941. The 120 acre, 18-hole public championship course was remodeled for the 1998-99 reopening held on May 7, 1999. The remodel added 3 lakes, new greens, tees, bunkers and cart paths. Montebello Country Club is now recognized as one of the best municipal golf courses in Southern California.

A conference center is located on the golf course grounds is the Quiet Cannon banquet room that holds up to 500 people. There is over 30,000 sq ft (2,800 m2) of private event space to accommodate groups of 25 or more guests.

Montebello's municipal tree division is responsible for maintaining the city's trees located in the parkways, street medians, parks and golf course. With an estimated total of 20,000 trees on city property, the tree division has been recognized by the National Arbor Day Foundation for the outstanding management of the city’s urban forest, and has been a continuous recipient of the "Tree City U.S.A." award since 1991.

Montebello is located 8 mi (13 km) east of downtown Los Angeles at the southwestern part of the San Gabriel Valley. The surrounding cities are Monterey Park, South San Gabriel, and Rosemead to the north, Commerce to the south, Pico Rivera to the east, and Los Angeles and East Los Angeles to the west. It is also sometimes considered part of the Gateway Cities, and the city is a member of the Gateway Cities Council of Governments.

Public transportation is provided by the city-owned Montebello Bus Lines; the service is the sixth largest public transit agency in Los Angeles County with an annual ridership of over 8.2 million. Starting in 1931 with a fleet of four buses, the agency now has a fleet of 66 buses, including five hybrid gasoline-electric buses and serves 14 communities.

Montebello LINK is a transportation shuttle offering curb-to-curb service to and from the Montebello/Commerce Metrolink station. Montebello also operates Montebello Dial-a-Taxi, a program offering transportation for senior residents and qualified disabled persons of any age. 15,000 residents utilize this service.

The City of Montebello has been affiliated with the City of Ashiya, Japan since the inception of the Sister City Program in 1961. Student Ambassadors are chosen to travel to Ashiya every year.

The City of Montebello has been affiliated with the City of Stepanakert, the capital of the unrecognized Nagorno-Karabakh Republic, since 2005, when a much controversial move to facilitate the sister city relationship was made by the Armenian National Committee of the San Gabriel Valley and unanimously approved by the City Council.

All content from Kiddle encyclopedia articles (including the article images and facts) can be freely used under Attribution-ShareAlike license, unless stated otherwise. Cite this article:
Montebello, California Facts for Kids. Kiddle Encyclopedia.