Commerce is a city located in southeast Los Angeles County, California, United States. The population was 12,823 at the 2010 census, up from 12,568 at the 2000 census. It is usually referred to as the City of Commerce to distinguish it from the common noun. It is bordered by Vernon on the west, Los Angeles on the northwest, East Los Angeles on the north, Montebello on the east, Downey and Bell Gardens on the south, and Maywood on the southwest. The Los Angeles River forms part of its southwestern boundary, and the Rio Hondo separates it from Downey. Commerce is served by the Long Beach and Santa Ana freeways, as well as the Metrolink commuter rail service at the Commerce station.

In the 19th century, the area was part of Antonio Maria Lugo's Rancho San Antonio. Its conversion to an industrial area began in 1887, when the Atchison, Topeka and Santa Fe Railway built its main line through the area. The ranch remained intact until Arcadia Bandini de Stearns Baker, reputedly once the wealthiest woman in Los Angeles, sold some of it around the turn of the 20th century. The Atchison, Topeka and Santa Fe Railway and Los Angeles and Salt Lake Railroad (later the Union Pacific) both were built through what would become the community, as was the Pacific Electric Railway's Whittier Line. By the 1920s, factories had arrived. In the late 1940s, industrial leaders banded together with residents in the communities of Bandini, Rosewood, and Laguna to encourage commerce. They changed the name to match that goal.

The city was incorporated in 1960 to prevent neighboring cities such as Vernon and Los Angeles from annexing industrial land for tax revenue and elected its first city mayor, Maurice Quigley. In the 1970s and 1980s, Commerce successfully negotiated the turbulent period of deindustrialization that hammered nearby cities such as South Gate and Norwalk, maintaining much of its manufacturing and goods-distribution base and successfully converting former industrial land to lucrative commercial uses. The most notable example of this phenomenon is the Citadel outlet mall, which occupies the site of a former tire factory. The owner of the Citadel, Steve Craig, hosts an annual Clean Up Commerce Day and enlists other businesses to work with the city and volunteers in beautifying a specific area of the city. With a major rail yard within its borders, Commerce has also benefited greatly from the huge expansion in international trade traffic through the ports of Los Angeles and Long Beach, albeit at the expense of severe air pollution caused by truck congestion on the Long Beach Freeway.

Chrysler had an assembly plant in Commerce from 1930 through July 1971 located at 5800 S. Eastern Avenue and Slauson Avenue, called Los Angeles (Maywood) Assembly. It was closed at the end of the 1971 model year, as Chrysler decided to triple-stack its transport trains for the 1972 model year; its Los Angeles facility couldn't accommodate this change.

Commerce has become the water polo capital of the world. It boasts a large aquatic center, Commerce Aquatics that has trained a number of successful water polo players, including four-time Olympic medallist Brenda Villa.

Commerce is also the site of Williams Ranch. The Sleepy Lagoon swimming hole was located near Slauson and Eastern Ave.

According to the 2010 United States Census, Commerce had a median household income of $48,729, with 16.5% of the population living below the federal poverty line.

These were the ten cities or neighborhoods in Los Angeles County with the largest percentage of Latino residents, according to the 2000 census:

Commerce has one friendship city.: 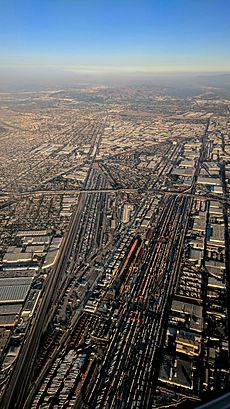 According to the city's 2010 Comprehensive Annual Financial Report, the top employers in the city are:

Kimlan Foods USA has its headquarters in Commerce.

Elementary schools that serve Commerce include:

Intermediate schools that serve Commerce include:

High schools that serve Commerce include:

All content from Kiddle encyclopedia articles (including the article images and facts) can be freely used under Attribution-ShareAlike license, unless stated otherwise. Cite this article:
Commerce, California Facts for Kids. Kiddle Encyclopedia.