Lincoln Heights is considered to be the oldest neighborhood in Los Angeles, California, outside of Downtown. It is a densely populated, youthful area, with high percentages of Latino and Asian residents. It has nine public and four private schools and several historic or notable landmarks.

Lincoln Heights is bounded by the Los Angeles River on the west, the San Bernardino Freeway (I-10) on the south, and Indiana Street on the east; the district's Eastern border is unclear due to the area's uneven terrain. Adjacent communities include El Sereno on the east, City Terrace on the southeast, Boyle Heights on the south, Chinatown and Solano Canyon on the west, Cypress Park on the northwest, Mt. Washington on the north, and Montecito Heights on the northeast. Major thoroughfares include Valley Boulevard; Mission Road; Pasadena Avenue; North Main, Marengo, Daly, and Figueroa Streets; and North Broadway. The Golden State Freeway (I-5) runs through the district, and the Metro Gold Line has a stop in the far northwestern portion of the district.

Lincoln Heights is considered to be the oldest suburb of Los Angeles proper, dating to the 1830s and found within the original Spanish forty-square league land grant. Perched on bluffs overlooking the Los Angeles River and its formerly lush floodplain, it was the erstwhile home to some of the city's most notable residents, who built numerous Victorian mansions, many of which have been preserved under the city's historic preservation program. Historically, the neighborhood was known as "East Los Angeles" when it was home to the commanding general of the Confederate States Army who died in the saddle, Albert Sidney Johnston, predecessor of Robert E. Lee. His brother-in-law, Dr. John Strother Griffin, also called the suburb home. Johnston Street, Griffin Avenue, and Hancock Street are named after their family. After the deaths of the Southern fathers of Los Angeles, the name "East Los Angeles" was changed to Lincoln Heights in memory of their nemesis.

Thereafter, what would be known as North Broadway became a crowded commercial thoroughfare, and by the turn of the 20th century, unfettered industrial construction within the once scenic floodplain made it less appealing for Angelenos of means, who moved out first to the Arroyo Seco area and Hollywood, then (from the 1920s onward) to rapidly developing Mid-Wilshire. As wealthy residents departed, Lincoln Heights became home to a large Italian American population, as well some Irish American and French American (the 1850s era immigration) residents and with an increasingly large Mexican American population. It and its cross-river neighbor "Little Italy" (what is now Chinatown) formed the heart of southern California's Italian-American community. One of the major landmarks from this period, the San Antonio Winery, continues to operate today, albeit with non-local grapes. The neighborhood's original name was East Los Angeles, but in 1917 residents voted to change the name to Lincoln Heights. The neighborhood has slowly been gentrifying due to the Northeast Los Angeles housing price escalation of 2013 and 2014. 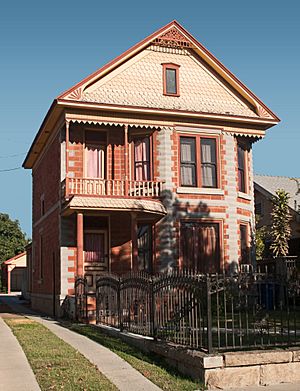 The 2000 U.S. census counted 26,616 residents in the 2.51-square-mile Lincoln Heights neighborhood—or 10,602 people per square mile, an average population density for the city. In 2008, the city estimated that the population had increased to 29,637. In 2000 the median age for residents was 27, considered young for city and county neighborhoods. The percentages of residents aged 10 through 18 were among the county's highest.

The neighborhood was considered "not especially diverse" ethnically within Los Angeles, with a relatively high percentage of both Asian and Latino people. The breakdown was Latinos, 70.7%; Asians, 25.2%; whites, 2.7%; blacks, 0.4%; and others, 1.0%. Mexico (57.0%) and Vietnam (16.9%) were the most common places of birth for the 55,8% of the residents who were born abroad—which was a high percentage for Los Angeles.

The median yearly household income in 2008 dollars was $30,579, considered low for the city. Renters occupied 75.9% of the housing stock, and house- or apartment-owners held 24.1%. The average household size of 3.6 people was considered high for Los Angeles.

The percentages of never-married men (53.0%) and women (40.6%) were among the county's highest. The 19.5% of families headed by single parents was considered about average for city neighborhoods. There were 500 veterans, or 2.8% of the population, a low proportion compared to the rest of the city.

All content from Kiddle encyclopedia articles (including the article images and facts) can be freely used under Attribution-ShareAlike license, unless stated otherwise. Cite this article:
Lincoln Heights, Los Angeles Facts for Kids. Kiddle Encyclopedia.