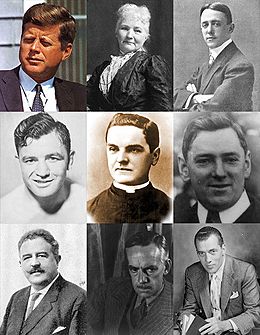 Irish Americans (Irish: Gaedheal-Mheiriceánaigh) are an North American ethnic group. They are American citizens whose ancestors were Irish.

People are called Irish Americans if:

Most Irish people came to the United States between the 17th to mid-19th centuries.

Most Irish people who came to the United States during the 1800s lived in big cities where there were many other Irish people. They did this so they could help and protect each other. Many stayed near the ports where they arrived, like Boston, New York City, San Francisco, and Los Angeles. Many Irish people also lived in Chicago, Philadelphia, Detroit, St. Louis, Pittsburgh, and Baltimore.

Most of the Irish immigrants who came to America in the 1800s were Catholic. At that time, most of the United States was controlled by Protestants who were ethnically English, Anglo-Saxon, and Germanic.

Many Irish immigrants were treated badly. For example:

Some politicians spoke out against Irish people. For example, in 1836, Benjamin Disraeli wrote:

[The Irish] hate our order, our civilization, our enterprising industry, our pure religion. [They are a] wild, reckless, indolent [lazy], uncertain and superstitious race.

In the mid-1950s, a political group called the Know-Nothing Movement tried to get Catholic politicians fired from their jobs.

Stereotypes about Irish Americans did not go away. For example, President Richard Nixon once said:

"the Irish can't drink. What you always have to remember with the Irish is they get mean. Virtually every Irish I've known gets mean when he drinks. Particularly the real Irish."

In 2013, about 33.3 million Americans - about one in every 10 - reported having some Irish ancestry. This is about seven times the number of people who actually live in Ireland.

All content from Kiddle encyclopedia articles (including the article images and facts) can be freely used under Attribution-ShareAlike license, unless stated otherwise. Cite this article:
Irish Americans Facts for Kids. Kiddle Encyclopedia.