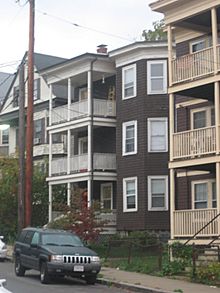 Forest Hills is a part of the Jamaica Plain neighborhood of Boston, Massachusetts, United States. Forest Hills is characterized by hilly terrain and wooded areas within and adjacent to its borders. In general, the area slopes upward from Hyde Park Ave and downward from Walk Hill Street.

Forest Hills is primarily residential, although a number of small businesses are located along Hyde Park Avenue. Single family homes predominate south of Walk Hill Street, but triple deckers dominate near the train station. As in the rest of Jamaica Plain, many of the multi-unit houses have been converted into condominiums. Spaced relatively close together, homes are generally well-kept and many have lush gardens, interesting architectural details. A variety of home styles are represented including Arts & Crafts, Cape Cod, Colonial Revival, Queen Anne, Tudor Revival and Victorian. South of Walk Hill Street, Forest Hills is characterized by curving, tree-lined streets laid out in irregular patterns indicative of how the area was thoughtfully transformed from country estates into a streetcar suburb.

For much of the 20th century, Forest Hills was home to working-class laborers on the streets adjacent to the train station, and middle-class managers and professionals to the south, with neither public housing nor areas of affluence. In the last generation, this area has become not only racially integrated, but has also undergone a degree of gentrification. These changes have been fueled, in part, by the easy access to Longwood Area, Museum School, Mass Art, Northeastern, and downtown Boston by public transportation.

The first European known to have settled in Forest Hills was Capt. Joseph Weld (ancestor of former Governor of Massachusetts William Weld), the youngest of three immigrant brothers from England and a veteran of the Pequot War of 1637. For his efforts in that conflict and subsequent negotiations, the leaders of Massachusetts Bay Colony awarded him 278 acres (1.1 km2) untamed in what is now the Forest Hills area of Jamaica Plain.

His descendant Col. Eleazer Weld, one of seven Weld family members who fought in the American Revolutionary War, bequeathed some of his land to fellow patriot Benjamin Bussey. His combined area was subsequently willed to Harvard University and become the basis for Arnold Arboretum.

In 1845, the Welds sold a large piece of land that would later become the Woodbourne area to William Minot, a fellow Yankee farmer. As the New England economy shifted from an agricultural base to a mercantile base, the Welds divided their land into smaller parcels for elite Bostonian friends and relatives. Some lived here year round; for others it was a rural retreat from Boston’s summer heat and seasonal cholera outbreaks.

The Weld family and families to whom they were connected—especially Guild, Minot, Perkins, Olney, Peters and Rodman—were associated with Jamaica Plain for generations. A number of local statesmen were drawn from these families, and many of them became wealthy or famous.

Richard Olney built what might be the first tennis court in Boston on what is now Patten Street. George Minot won a Nobel Prize. William Fletcher Weld (whose mother was a Minot) left behind a $20 million dollar fortune. Stephen Minot Weld, Jr. and George H. Perkins were Civil War heroes. Andrew James Peters (who married a Minot), became Mayor of Boston. A previous incarnation of Perkins School for the Blind stood atop Wachusett Street.

In the early 20th century, the arrival of public transportation brought increasing numbers of working-class people and rich Yankee families abandoned Forest Hills. Some returned to ancestral haunts on Beacon Hill or in Brookline. Others went farther south to Dedham or Westwood or even left the state entirely.

Forest Hills is not an officially designated area of the city nor have its borders been defined. Generally, "Forest Hills" refers to the area immediately surrounding the train station, plus the residential areas on the East side of Hyde Park Avenue extending perhaps as far as Cummins Highway or perhaps only as far as Walk Hill Street.

More often, Forest Hills refers to a roughly triangular area lying between Hyde Park Avenue, American Legion Highway and Morton Street, except for those areas separated from the rest by the cemeteries.

In 1914, four apartment buildings covered with light stucco were erected on Hyde Park Ave far South of the train station. The complex was called "White City" in emulation of the World's Columbian Exposition a decade earlier. The name was later borrowed by the White City Food Store and the White City Cleansers (sic) on the corner of Hyde Park Ave and Eldridge Road, thus putting the "White City" name on two large signs visible even to those whizzing by on Hyde Park Ave. White City came to be regarded as a section of Forest Hills, but not a separate section of Jamaica Plain. Its borders were seen as Walk Hill Street, Hyde Park Ave and St. Michael's Cemetery. The area now thought of as "Woodbourne" was contained within.

White City was not an all-White area of Jamaica Plain. Jamaica Plain was always a diverse section of the City of Boston, as was made obvious by the diversity of Jamaica Plain High School, the most integrated school in the City of Boston in the late 1950s. White City Cleansers was renamed around 2003; its sign was the last prominent reminder of the name that was once given to this section of Jamaica Plain. Racists had tried to link the name, White City, associated with the white stucco apartment buildings, with race. However, white was simply the color of the stucco applied to two buildings on Hyde Park Ave.

The Woodbourne Historic District is a historic residential subdivision in Forest Hills. It consists of a 30-acre (12 ha) parcel of land southwest of Forest Hills Cemetery, roughly bounded by Walk Hill Street, Goodway Road, and Wachusett Street. This area was developed into house lots between 1890 and 1933 by financier Robert Winsor in an effort to create a sort of utopian community for middle-class families. Frederick Law Olmsted, Jr. was responsible for some of its layout.

The "bourne" element in streets such as Southbourne and Bournedale is taken from Bourne Street, a road established around 1820. Bourne Street begins at Walk Hill Street across from Forest Hills Cemetery, meanders through a scenic residential area and St. Michael's cemetery, then comes to an end at Canterbury Street and Mt. Hope Cemetery. The most distinctive homes in this section are designed to resemble gabled English cottages and are situated around a common courtyard. While the means to flatten out this terrain was readily available, developers chose to retain the uneven character of the landscape to preserve a country-like estate feel.

Since Woodbourne was designated as a historic district in 1999, homeowners and realtors have begun advertising homes there as belonging to the "Woodbourne area" rather than saying that they are in "Forest Hills". Nevertheless, Woodbourne was designed and advertised with the proximity of the train station in mind, was an integral part of the Roman Catholic parish of St. Andrew the Apostle, and was thought of as part of Forest Hills by its residents throughout the 20th century. 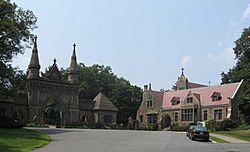 There is a baseball field at the top of Wachusett Street which is bordered by trees and adjacent to the well-maintained Parkman Playground. There are also small, nameless patches of woodland, such as the one between Patten Street and Eldridge Road.

Outcroppings of Roxbury puddingstone dot the landscape, both within the green areas and in unexpected locations, such as the immense lump of puddingstone on Wachusett Street across from the Parkman School.

A large portion of Forest Hills is occupied by Forest Hills Cemetery, an active cemetery, also enjoyed as a 275-acre (1.1 km2) park and arboretum , recognized as one of the finest 19th-century rural cemeteries in the country and listed on the National Register of Historic Places. Eugene O'Neill, e.e. cummings and William Lloyd Garrison are among the famous people buried here. St. Michael’s Cemetery & Crematory (across Walk Hill Street from the Forest Hills Cemetery) is more contemporary in design. Calvary Cemetery, Mt. Hope Cemetery and New Calvary Cemetery are also large in size and are more contemporary (i.e. level and sparsely wooded) burial grounds that lie on the opposite side of American Legion Highway. Together these cemeteries form a "dead area" that separates Forest Hills from the nearest sections of Mattapan and Roxbury. 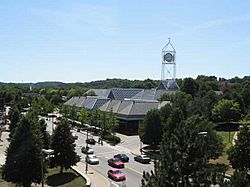 Forest Hills is served by the Forest Hills Station, a local transportation hub operated by the Massachusetts Bay Transportation Authority (MBTA). This station is the southern end of the Orange Line, is a stop on the Commuter Rail's Needham Line, and was previously the terminal for the Green Line's E branch, until it was truncated to Heath Street in north Jamaica Plain. Service along that route is provided by the 39 bus. Orange line service runs from here north to Malden on the North Shore via Downtown Crossing. Bus routes servicing the station are the 16, 21, 30, 31, 32, 34/34E, 25, 26, 37, 38, 39, 40, 42, 50 and 51, and are accessible from berths all around the station, on upper and lower levels.

This station created the impetus for development of the local area since the Boston & Providence Railroad opened in 1834. The local area got its name after the establishment of the eponymous cemetery in 1848; subsequently, that name was applied to the station. 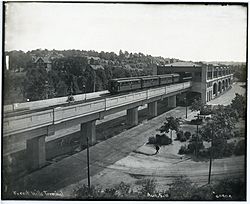 The original Forest Hills Station was a large red brick structure built in the 19th century. In the early 20th century, the traditional tracks to the North were replaced with an elevated railway which lead into Boston and connected with the city's subway, the oldest in the nation. The elevated track and the original station were torn down in the late 1980s. The station was replaced with the current, modern style station and clock tower designed by Cambridge Seven Associates and completed in 1987.

The Monsignor William J. Casey Overpass (a.k.a. Morton Street overpass) stood just north of the station, was built in the 1950s to bypass Forest Hills and connect the Arborway to Morton Street. and was demolished in 2015. 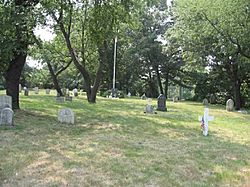 Before the trains were built in the 1830s, the area that is now Forest Hills Station was known as (the) Toll Gate. The Norfolk and Bristol Turnpike was created in 1803, providing a main route between Boston and Providence, Rhode Island. The Hartford and Dedham Turnpike was chartered the following year, serving as a main road through to Hartford, Connecticut.

At the facility that stood at what is now the MBTA station, carts and wagons from Roxbury and environs were weighed and charged a toll before being allowed onto the privately owned turnpike. The turnpike became unprofitable and changed into a public road in 1857. In 1874, it was renamed Washington Street and it remains one of the longest streets in the Commonwealth. Long after the train station had acquired the name "Forest Hills", its older identity was preserved in the name of the Toll Gate Bridge, a metal footbridge that crossed the railroad tracks to Washington Street at the point where Walk Hill Street meets Hyde Park Avenue.

The overhead structure of the footbridge remains, but the stairs on both sides were removed during the 1990s after Ukraine Way (nearer the station) provided a crossing point for both pedestrians and traffic. Adjacent to the footbridge entrance, the small, neglected Tollgate Catholic graveyard containing 19th and early 20th century headstones sits along Hyde Park Avenue. A monument to Irish-American war dead was created in the 1980s, and each year flags are placed on the graves of veterans.

All content from Kiddle encyclopedia articles (including the article images and facts) can be freely used under Attribution-ShareAlike license, unless stated otherwise. Cite this article:
Forest Hills, Boston Facts for Kids. Kiddle Encyclopedia.