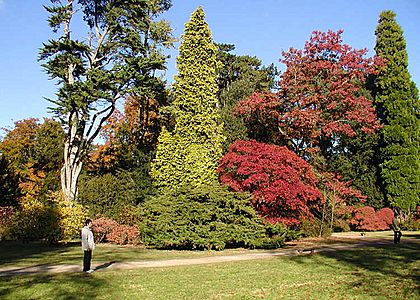 An arboretum (plural: arboreta) in a general sense is a botanical collection composed exclusively of trees. More commonly a modern arboretum is a botanical garden containing living collections of woody plants and is intended at least in part for scientific study.

An arboretum specializing in growing conifers is known as a pinetum. Other specialist arboreta include saliceta (willows), populeta (poplar), and querceta (oaks).

The term arboretum was first used in an English publication by John Claudius Loudon in 1833 in The Gardener's Magazine but the concept was already long-established by then.

All content from Kiddle encyclopedia articles (including the article images and facts) can be freely used under Attribution-ShareAlike license, unless stated otherwise. Cite this article:
Arboretum Facts for Kids. Kiddle Encyclopedia.