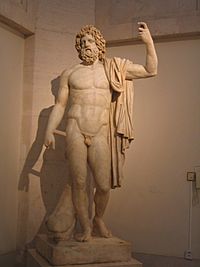 Neptune (Latin: Neptūnus) is the god of water and the sea in ancient Roman religion and mythology. His Greek equivalent is the god Poseidon.

Neptune is the brother of Jupiter and Pluto; the brothers preside over the realms of Heaven, the earthly world, and the Underworld. Salacia is his wife.

Neptune was associated with fresh water as well as the sea, while Oceanus was the god of the world-ocean. Like his Greek equivalent, Neptune was also worshipped by the Romans as the god of horses, and, under the name Neptune Equester, he was a patron god of horse-racing.

The planet Neptune is named after this Roman god.

All content from Kiddle encyclopedia articles (including the article images and facts) can be freely used under Attribution-ShareAlike license, unless stated otherwise. Cite this article:
Neptune (mythology) Facts for Kids. Kiddle Encyclopedia.