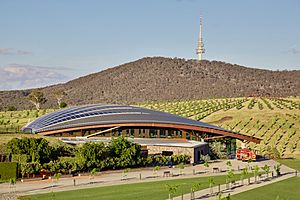 Canberra National Arboretum (foreground) with Telstra Tower in the distance

The National Arboretum Canberra is a 250-hectare (618 acre) arboretum in Canberra, the national capital of Australia, created after the area was burned out as a result of the Christmas 2001 and 2003 Canberra bushfires: The Himalayan Cedar forest lost about one third of its trees, and the commercial Radiata Pine plantation was burned out, allowing the arboretum to be created.

In 2004, the Government of the Australian Capital Territory held a nationwide competition for an arboretum, which was to be part of the recovery from the 2003 bushfires. The winning design by landscape architects Taylor Cullity Lethlean and architects Tonkin Zulaikha Greer proposed 100 forests and 100 gardens focussing on threatened, rare, and symbolic trees from around the world.

The site has been planted since 2005, and includes ceremonial trees planted by visiting heads of government and ambassadors. It was officially opened in February 2013. Over 15,000 visitors came to the Opening Day Festival. Since that day, over a million visitors of all ages and nationalities have explored the beauty and scale of the Arboretum's forests, landscapes and architecture. 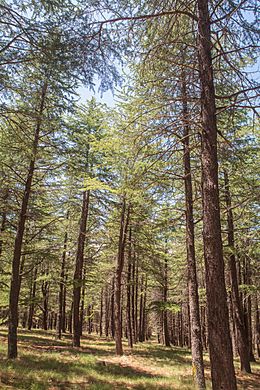 The established areas include existing forests of Himalayan cedar (Cedrus deodara) and cork oak (Quercus suber) planted under the guidance of early town planners under general direction from the city's planner, Walter Burley Griffin. The arboretum is generally in keeping with Griffin's plan for such an arboretum, as expressed by the earlier forests.

A forest of Turkish Pine Pinus brutia, a species native to the Gallipoli Peninsula in Turkey, has been planted to commemorate Australian service personnel killed in all conflicts. In addition, a number of ceremonial Aleppo Pines (Pinus halepensis) have been planted on the summit of Dairy Farmers Hill, propagated from seed of the Lone Pine tree planted at the Australian War Memorial. These complement a number of mature specimens of this species already existing on the hill.

The National Bonsai and Penjing Collection of Australia, previously in Commonwealth Park, has been relocated to the arboretum.

Close to the main building, the Village Centre, a eucalyptus forest representative of remnant and former forests of the Southern Tablelands region has been established with the long-term objective of creating a regional botanic garden, education and ecosystem recovery centre. It includes 16 eucalypt species from various habitats and a rich diversity of under-storey shrubs, grasses, ground covers, flowers and herbs providing natural habitat for a range of animals.

The arboretum has some outstanding views and an open-air stage and amphitheatre. The buildings include the Village Centre, an innovative timber structure housing a cafe, restaurant, gift shop and interpretive exhibition, and a smaller event and ceremonial building called the Margaret Whitlam Pavilion. The stonework in the visitors center is sourced from the town of Wee Jasper, New South Wales, on the outskirts of Canberra.

"wide brown land", spelling out the description of Australia by Dorothea McKellar in her poem My Country, based on McKellar's handwriting. 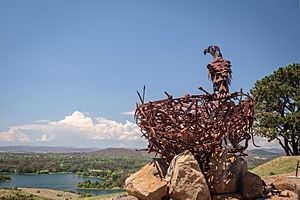 On a hill within and overlooking the arboretum is "wide brown land", spelling out the description of Australia by Dorothea McKellar in her poem My Country, taken from the original manuscript in McKellar's handwriting. It is approximately 35m in length and 3m tall.

On Dairy Farmers Hill is a found objects artwork depicting an eagle on a nest.

All content from Kiddle encyclopedia articles (including the article images and facts) can be freely used under Attribution-ShareAlike license, unless stated otherwise. Cite this article:
National Arboretum Canberra Facts for Kids. Kiddle Encyclopedia.