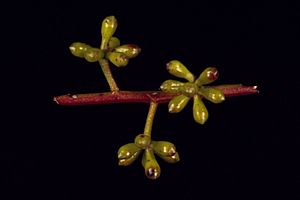 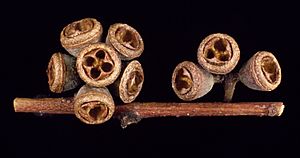 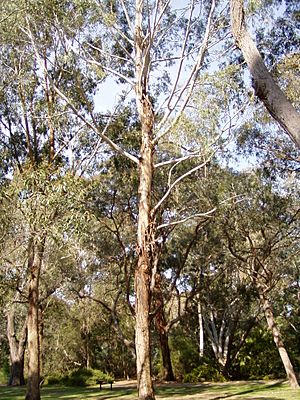 Camden white gum is related to E. viminalis. Eucalyptus dorrigoensis is a species from the Dorrigo Plateau that was previously classified as a subspecies of E. benthamii, but does not appear especially related.

Eucalyptus benthamii was first formally described by Joseph Maiden and Richard Hind Cambage in 1915 from a specimen collected "from the banks of the Nepean River near Cobbity". The description was published in Journal and Proceedings of the Royal Society of New South Wales. Maiden and Cambage did not give a reason for the specific epithet (benthamii) but it is assumed to honour George Bentham.

This eucalypt is classified as "vulnerable" under the Australian Government Environment Protection and Biodiversity Conservation Act 1999 and the New South Wales Government Biodiversity Conservation Act 2016. It is known from two main populations, one near the Kedumba River in the Blue Mountains National Park, the other at Bents Basin State Recreation Area south of Wallacia. Scattered trees are found around Camden, Cobbity and in Nattai National Park. Some 10,000 trees are estimated to grow at Kedumba and about 400 at Bents Basin. Land clearing and the flooding of most of its distribution to create Warragamba Dam have severely impacted its population.

Camden white gum is a fast-growing and adaptable tree in cultivation and is being investigated in South Africa and South America for pulpwood plantations.

All content from Kiddle encyclopedia articles (including the article images and facts) can be freely used under Attribution-ShareAlike license, unless stated otherwise. Cite this article:
Camden white gum Facts for Kids. Kiddle Encyclopedia.