Wollemia is a genus of coniferous tree in the family Araucariaceae. It is a "living fossil", recently found in 1994. Its fossil record dates back 200 million years, and it was thought to be long extinct.

Wollemia nobilis was discovered in 1994 in a temperate rainforest wilderness area of the Wollemi National Park in New South Wales. in a remote series of narrow, steep-sided sandstone gorges near Lithgow, 150 kilometres north-west of Sydney.

In both botanical and popular literature the tree has been called the Wollemi Pine. It is not a true pine (genus Pinus) nor a member of the pine family (Pinaceae), but is related to Agathis and Araucaria in the family Araucariaceae.

The Wollemi pine is classified as Critically Endangered (CR – D) on the International Union for Conservation of Nature's Red List 2002. It is legally protected in Australia. A Recovery Plan has been drawn up, outlining strategies for the management of this fragile population; the overall objective is to ensure that this species remains viable in the long-term. 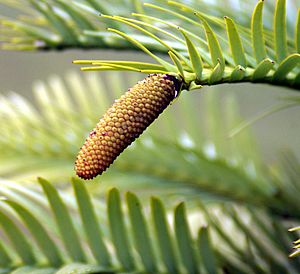 All content from Kiddle encyclopedia articles (including the article images and facts) can be freely used under Attribution-ShareAlike license, unless stated otherwise. Cite this article:
Wollemia Facts for Kids. Kiddle Encyclopedia.