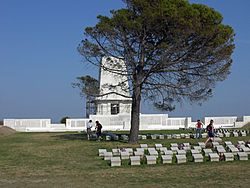 The Lone Pine was a solitary tree on the Gallipoli Peninsula in Turkey, which marked the site of the Battle of Lone Pine in 1915. It was Turkish or East Mediterranean pine (Pinus brutia).

Pines which are planted as a memorial to the Australian and New Zealand soldiers who fought in Gallipoli are also known as "Lone Pines" or "Gallipoli Pines". However, there are at least two species of pine in that locality—in addition to Pinus brutia, the Aleppo Pine (Pinus halepensis) is also common. Branches from Aleppo pines were also used by the Turks to protect their trenches, and cones and seeds from Aleppo pines are common at "Lone Pine" memorials in Australia, including the tree at the Australian War Memorial.

The tree at the Lone Pine Cemetery at Gallipoli is of a third species: stone or umbrella pine (Pinus pinea).

The "original" Lone Pine, a Turkish pine (Pinus brutia), was the sole survivor of a group of trees that had been cut down by Turkish soldiers for timber and branches to cover their trenches during the battle. They had also cut down other trees to do this, most particularly Aleppo pines (Pinus halepensis). The tree was obliterated during the battle; however, pine cones that had remained attached to the cut branches over the trenches were retrieved by various Australian soldiers and brought home to Australia. The resulting seedlings sent home by one soldier were found to be Pinus brutia (Turkish pine), but those sent home by a pair of soldiers were found to be Pinus halepensis (Aleppo pine). At the time Turkish pines were regarded as a subspecies of Pinus halepensis, but now they are usually classified as a distinct species, Pinus brutia. 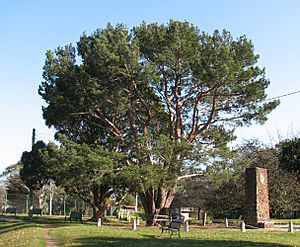 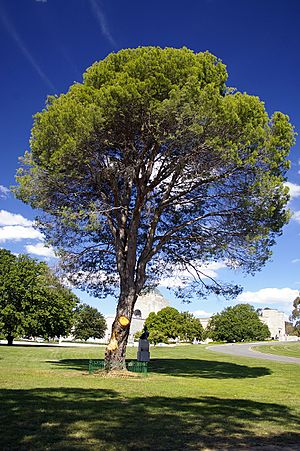 Keith McDowell, an Australian soldier of the 23rd Battalion who fought at Gallipoli, brought a pine cone from the battle site home to Australia. Many years later seeds from the cone were planted by his wife's aunt Emma Gray of Grassmere, near Warrnambool, Victoria and five seedlings emerged, with four surviving. These seedlings were planted in four different locations in Victoria: Wattle Park, Melbourne (8 May 1933), the Shrine of Remembrance (11 June 1933), the Soldiers Memorial Hall at The Sisters near Terang (18 June 1933) and Warrnambool Botanic Gardens (23 January 1934).

The tree at the Shrine Reserve was planted near the north-east corner of the building by Lieutenant-General Sir Stanley Savige, founder of Melbourne Legacy, at a formal ceremony. In 2005 the tree required cable bracing following the loss of a major limb and in August 2012, despite measures taken to try to save the tree from the effects of disease caused by the fungus Diplodia pinea, it was removed. A "grandchild tree" was planted nearby in 2006. A Middle Park man, Andrew Lees, collected cones from the broken limb in 2005 and by 2015 had managed to germinate about 20 seedlings.

Another soldier, Lance Corporal Benjamin Smith from the 3rd Battalion, also retrieved a cone from the battle site and sent it back to his mother in Australia, (Mrs McMullen), who had lost another son at the battle. Seeds from the cone were planted by her in 1928, from which two seedlings were raised. One was presented to her home town of Inverell, New South Wales and the other was forwarded to Canberra where it was planted by Prince Henry, Duke of Gloucester at the Australian War Memorial (AWM) in October 1934. The AWM lone pine lost two of its large lower limbs by strong winds preceding a thunderstorm on 27 December 2008. However, tree surgeons were able to save the historic tree.

Both Melbourne Legacy and the Yarralumla Nursery in Canberra have raised and grown seedlings over a number of years, sourced from the tree at the Shrine of Remembrance and the Australian War Memorial respectively, which they have presented to schools as well as ex-service and other organisations throughout Australia.

Other "Lone Pines" include:

In Auckland, two trees identified as "Lone Pines" have been planted. One is a Pinus canariensis planted at Waikumete cemetery in 1961 and another is a Pinus radiata at Auckland War Memorial Museum, planted by Victoria Cross recipient Cyril Bassett on Anzac Day in 1950. A tree identified as "The Anzac Pine" stands on Te Mata Peak at Havelock North in Hawkes Bay. Although a specimen of Pinus brutia was originally planted, the current tree is identified as the species Pinus radiata. Two specimens of Pinus halepensis, planted in 1951, are located at the Lone Pine Memorial at the cemetery in Taradale, and further specimens are located at King Edward Park in Stratford and Queens Park in Whanganui. There is a "Lone Pine" at the Paeroa golf course, at the ladies tee, on the second hole. This tree appears to be New Zealand's only authentic Pinus brutia that can be traced back to the original pines, according to "Excerpts from NZ Journal of Forestry, May 2007". In both Dixon Park, Greymouth, and Victoria Park, Christchurch, are plaques which claim that the nearby pine tree was grown from a seedling of the Gallipoli Lone Pine.

All content from Kiddle encyclopedia articles (including the article images and facts) can be freely used under Attribution-ShareAlike license, unless stated otherwise. Cite this article:
Lone Pine (tree) Facts for Kids. Kiddle Encyclopedia.