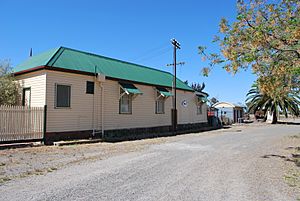 Finley station, built in an American "pioneer" style as a cost-saving measure during the depression at the turn of the 19th century.

Finley is a town in the Riverina region of New South Wales, Australia. It is the largest town in the Berrigan Shire local government area. At the 2016 census, Finley had a population of 2,519 people. The town is located approximately 140 kilometres (87 mi) west of Albury on the intersection of the Newell Highway and Riverina Highways.

The post office opened on 1 January 1881 but was known as Murray Hut until 1893. Europeans first settled the area around Finley in the early 1840s, with wheat becoming the main crop.

The Finley Agricultural & Pastoral Association was formed in 1912 and held its first show on 17 September 1913. The agricultural show is still held annually on the first Sunday in September (Father's Day).

Periods of severe drought, combined with the Great Depression of the early 1930s, forced many farmers to abandon their holdings.

In 1935, construction on the Mulwala Canal began in order to provide employment and bring water to the area’s rich farmland.

Finley is also home to a campus of Riverina TAFE.

Australian rules football, cricket and netball are all very popular in the town. Sporting teams include the Finley Football Club, who compete in the Murray Football League. The town also offers soccer, touch rugby, basketball, tennis and a Pony Club.

The Finley Rodeo Committee holds an annual rodeo every January and Finley Apex Club hosts a tractor pull every February.

All content from Kiddle encyclopedia articles (including the article images and facts) can be freely used under Attribution-ShareAlike license, unless stated otherwise. Cite this article:
Finley, New South Wales Facts for Kids. Kiddle Encyclopedia.