Because of its location near the border with Victoria, Berrigan was one of the pioneers in the push for an Australian Federation. It was at the suggestion of the Berrigan Australian Natives' Association that the first meeting of the Federation League was held. Due to its centrality, the meeting was held in Corowa.

It is also the birthplace of the New South Wales Rural Fire Service.

The Berrigan Canola festival is held annually in early September. Also held annually is the Berrigan Agricultural Show - Sunday of the October long weekend. It is also close to the Murray River communities of Barooga and Tocumwal.

The aging population is well catered for in such a small town, with world class hospice and respite facilities provided. While the town thrives on the farming income generated in the district, it is a very modern, and family-friendly town. In 2013, an Alzheimer's wing was opened, catering to the numerous residents suffering from the disease. 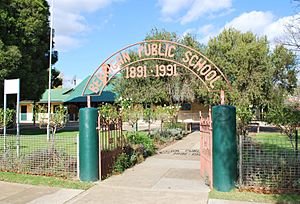 Berrigan has a state primary school, with the Catholic primary school having closed at the end of 2020. The nearest high school is in Finley, 22 kilometres (14 mi) to the west. Oaklands has a Central School, that is a part of the Riverina Access Partnership. 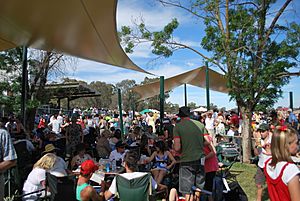 The crowd at the 2008 Berrigan Gold Gup race meeting

Popular sports in Berrigan include Australian rules football (the town has a team competing in the Picola & District Football League), netball, golf, bowls, and tennis. Horse racing is also popular, with the Berrigan Gold Cup — held on the same day as the Victoria Derby — attracting a large crowd.

All content from Kiddle encyclopedia articles (including the article images and facts) can be freely used under Attribution-ShareAlike license, unless stated otherwise. Cite this article:
Berrigan, New South Wales Facts for Kids. Kiddle Encyclopedia.