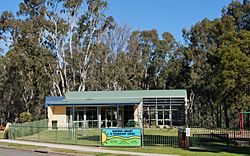 Barooga is a border town in the Riverina region of New South Wales, Australia, located in the Berrigan Shire local government area. It is situated just north of the Murray River which forms the border with Victoria. Barooga's population at the 2016 census was 1,817.

Barooga is a mainly residential area and most of its commercial and industrial needs are met in its twin town of Cobram on the south side of the Murray River.

Being only two and a half hours drive from Melbourne, Barooga is a popular holiday destination because it offers two registered clubs, a 36-hole golf course and river attractions and also a large Botanical Garden. Other attractions include a twenty-metre swing bridge, Quicks Beach, walking tracks and the Barooga Markets. Barooga is also home to the Barooga PBR - On The Murray which is a Bull Riding event held in December.

Barooga shares the postcode of 3644 with its twin town, Cobram. It is unusual for a town in New South Wales to have a postcode that begins with "3" which ordinarily signifies a location in Victoria. This is probably due to the mail being delivered via Cobram.

On 21 March 2013, a tornado ripped through Barooga causing widespread damage across different towns. Millions of dollars of damage was felt across Victoria And New South Wales.

All content from Kiddle encyclopedia articles (including the article images and facts) can be freely used under Attribution-ShareAlike license, unless stated otherwise. Cite this article:
Barooga Facts for Kids. Kiddle Encyclopedia.