Inverell is a town in northern New South Wales, Australia, situated on the Macintyre River. It is also the centre of Inverell Shire. Inverell is located on the Gwydir Highway on the western slopes of the Northern Tablelands. It has a temperate climate. In the 2011 census, the population of Inverell was 9,347.

Diamonds were discovered at Copes Creek in 1875 and were mined at Copeton from 1883-1922. Commercial sapphire mining was commenced in 1919 at Frazers Creek near Inverell. Rich alluvial deposits in streams were worked initially by hand miners but there was little recorded production up until approximately 1960.

The Grafton to Inverell Cycle Classic is an annual one day cycling event. Beginning in Grafton, passing through Glen Innes and finishing in Inverell, the Classic is a 230 km ride over the demanding Gibraltar Range. The race starts at 23 metres above sea level and climbs to 1260 metres, before finishing in Inverell at 630 metres. The race is six to seven hours long, depending on weather conditions.

Inverell is served by Inverell Airport.

Bus services in Inverell are provided by Inverell Bus Service, which operates two town loops, to the east and west. 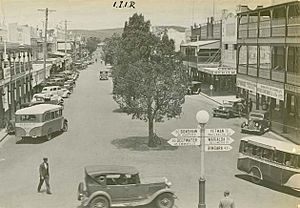 Over the years, Inverell has had three weather stations run by government astronomers (prior to 1908) or the Bureau of Meteorology (after 1908), or both. These stations are:

All content from Kiddle encyclopedia articles (including the article images and facts) can be freely used under Attribution-ShareAlike license, unless stated otherwise. Cite this article:
Inverell Facts for Kids. Kiddle Encyclopedia.