Common wheat (Triticum aestivum), also known as bread wheat, is a cultivated wheat species. About 95% of the wheat produced is common wheat.

Nomenclature and taxonomy of wheat and its cultivars

Numerous forms of wheat have evolved under human selection. This diversity has led to confusion in the naming of wheats, with names based on both genetic and morphological characteristics. For more information, see the taxonomy of wheat.

Free-threshing wheat is closely related to spelt. As with spelt, genes contributed from Aegilops tauschii give bread wheat greater cold hardiness than most wheats, and it is cultivated throughout the world's temperate regions.

Common wheat was first domesticated in Western Asia during the early Holocene, and spread from there to North Africa, Europe and East Asia in the prehistoric period.

Wheat first reached North America with Spanish missions in the 16th century, but North America's role as a major exporter of grain dates from the colonization of the prairies in the 1870s. As grain exports from Russia ceased in the First World War, grain production in Kansas doubled.

Worldwide, bread wheat has proved well adapted to modern industrial baking, and has displaced many of the other wheat, barley, and rye species that were once commonly used for bread making, particularly in Europe. 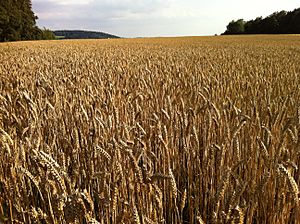 A field of wheat in Deggendorf, Germany

Modern wheat varieties have short stems, the result of RHt dwarfing genes that reduce the plant's sensitivity to gibberellic acid, a plant hormone that lengthens cells. RHt genes were introduced to modern wheat varieties in the 1960s by Norman Borlaug from Norin 10 cultivars of wheat grown in Japan. Short stems are important because the application of high levels of chemical fertilizers would otherwise cause the stems to grow too high, resulting in lodging (collapse of the stems). Stem heights are also even, which is important for modern harvesting techniques.

Other forms of common wheat

(e.g., club wheat Triticum compactum, but in India T. sphaerococcum) are closely related to common wheat, but have a much more compact ear. Their shorter rachis segments lead to spikelets packed closer together. Compact wheats are often regarded as subspecies rather than species in their own right.

All content from Kiddle encyclopedia articles (including the article images and facts) can be freely used under Attribution-ShareAlike license, unless stated otherwise. Cite this article:
Common wheat Facts for Kids. Kiddle Encyclopedia.