Moree is a town in Moree Plains Shire in northern New South Wales, Australia. It is located on the banks of the Mehi River, in the centre of the rich black-soil plains. Its name comes from an Aboriginal word for “rising sun,” “long spring,” or “water hole.”

Moree is a major agricultural centre, noted for its part in the Australian cotton-growing industry which was established there in the early 1960s. The town is located at the junction of the Newell Highway and Gwydir Highway and can be reached by daily train and air services from Sydney. It is situated in the Moree Plains Shire. At the 2016 census, the town of Moree had a population of 7,383.

Moree is home to artesian hot spring baths which are famous for their reputed healing qualities.

The Kamilaroi people, whose descendants are still in the town, were the early inhabitants of the area. Major Sir Thomas Mitchell went to the district at the request of the acting governor after the recapture of escaped convict George Clarke who told of a great river called the Kindur in 1832. Clarke had been living in the area to the south with the Kamilaroi from 1826-1831. Squatters soon followed in Mitchell's wake establishing pastoral runs, among which was 'Moree' (1844), from a Kamilaroi term believed to mean either 'long waterhole' or 'rising sun'.

In 1851 James and Mary Brand arrived and built a general store on the banks of the river in 1852. A post office was added the following year. The family sold up and moved to the Hunter Region in 1857 but James died in 1858 leaving Mary with six children so she returned opened another business and in 1861 she opened the town's first inn.

Moree was gazetted as a town in 1862 with land sales proceeding that year. A court of petty sessions was established in 1863 and there was a severe flood in 1864. The first constable arrived and a police station was set up in 1865. The first church (Wesleyan) was built in 1867 when the town had a population of 43.

As closer settlement proceeded agriculture emerged as a thriving industry on the fertile flood plains. Banking began in 1876 and the first local newspaper was set up in 1881, at which time the population was 295.

The town became a municipality in 1890. During 1894 construction of the heritage listed Federation-style lands office commenced and ended that years with the completion of the ground floor. The second storey was added in 1903. In 1895 the Great Artesian Basin which sits under Moree was tapped and yields over thirteen megalitres of water every day. The bore was sunk to 3,000 ft (910 m) deep in order to provide water for agricultural pursuits but was proved unsuitable for this purpose. The railway line and service from Sydney arrived in 1897.

Wheat cultivation increased after World War II with a flour mill built at Moree in 1951 and the first commercial pecan nut farm was established on the Gwydir Highway east of Moree in 1966. The Trawalla Pecan Nut Farm is the largest pecan nut farm in the southern hemisphere, growing about 75,000 trees. In 1994 the Gwydir Olive Grove Company was established when two Moree families started producing olive oil from olives grown in the area.

Moree was one of the destinations of the famous 1965 Freedom Bus ride, an historic trip through northern NSW led by Charles Perkins to bring media attention to discrimination against indigenous Australians. It brought racial segregation in rural Australia to the attention of urban Australians, in particular at the Moree public swimming pool as well as pubs and theatres, where Aborigines were refused entry. At the Moree swimming pool, after a confrontation with the council and pool management, it was agreed that indigenous children could swim in the pool outside school hours.

In 2007 the Moree Plains Council announced plans for a $14m upgrade to the hot thermal baths.

In January 1910 floods in the Moree district caused numerous washouts of the railway to Moree. An unknown number of livestock were drowned, and at least 4 people drowned in the Moree area.

In January 1946 a flood cut the township in two, and several hundred homes were flooded. The flood waters affected the local power station which caused a blackout. The floods also damaged roads and railway lines in the region. The Gwydir River bridge at Moree was also damaged.

In February 1955 the highest recorded major flood affected Moree, with a record flood peak of 10.85 metres. Most of the central business district of the town and 800 homes were flooded.

In February 1971 a major flood affected the town, with a flood peak of 10.35 m. Four hundred people were evacuated and the township was isolated for two weeks.

In February 1976, another major flood hit Moree, with a flood peak of 10.60 metres. Nearly three quarters of the buildings in north Moree either had floodwater surrounding them or water in them, which included the central business district.

In February 2001,another major flood peak was recorded in Moree. There were a few houses with over floor flooding. Before the flood, nearly 250 mm fell at Moree Airport within 48 hours.

In November 2011, major flooding flooded parts of Moree, with a peak of 10.21 metres. People were urged to evacuate from parts of north Moree and houses were flooded. Nearly 225 mm of rain was recorded over 72 hours with 112 mm falling in the final 24 hours of rainfall. Moree and numerous other shires were declared natural disaster zones.

In February 2012, major flooding again occurred in Moree. Peaking just 10 centimetres above the February 1976 floods at 10.69 metres, the floods inundated hundreds of houses in and around Moree. the floods were the second highest ever recorded in Moree. Nearly the whole of north Moree had water in the streets with just a few still out. The whole of north Moree was told to evacuate the day before the flood peak including the nearby villages of Yarraman, Gwydirfield, Bendygleet, Pallamallawa and Biniguy. Some of the lower parts of south Moree became inundated with flooding. All of north Moree were urged to evacuate as it was expected then to be the worst flooding in 35 years. Fortunately, there were no fatalities recorded. Nearly 190 mm of rain was recorded in the 72 hours before the flood at the Moree Meteorological Station. 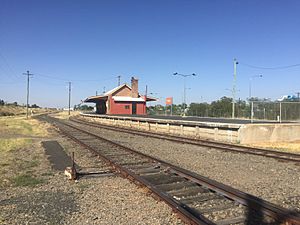 Moree railway station is situated on the Mungindi line, 665 kilometres (413 mi) from Sydney. The station opened in 1897 and currently marks the northernmost point of passenger services on the line, a daily NSW TrainLink Xplorer DMU to and from Sydney.

The most popular sport in Moree by a wide margin is rugby league. There are two rugby league teams from the town, the Moree Boars of Group 4, and the famous Aboriginal team the Moree Boomerangs of Group 19. The teams play at Boughton Oval and Burt Jovanovich Oval respectively, often in front of many spectators.

Other sports teams include the Moree Suns and Moree Weebolla Bulls RUFC.

All content from Kiddle encyclopedia articles (including the article images and facts) can be freely used under Attribution-ShareAlike license, unless stated otherwise. Cite this article:
Moree, New South Wales Facts for Kids. Kiddle Encyclopedia.