Warwick is a town and locality in southeast Queensland, Australia, lying 130 kilometres (81 mi) south-west of Brisbane. It is the administrative centre of the Southern Downs Region local government area. The surrounding Darling Downs have fostered a strong agricultural industry for which Warwick, together with the larger city of Toowoomba, serve as convenient service centres. The town had an estimated urban population of 15,505 at June 2015.

The Condamine River meanders from the east to the north-west of Warwick. One of its tributaries, Rosenthal Creek, enters Warwick from the south and enters the Condamine within Warwick.

The Condamine River often floods, which can disconnect the northern and southern parts of Warwick and close the highways. Gauges that measure river height are used to provide flood alerts to residents. Low-lying land around the river is mostly used for recreation to minimise the damage caused by flooding with most developed areas at higher levels. Queens Park is a major park based around the river and the highway crossing.

The Warwick central business district is laid out on a grid pattern and lies within one or two blocks of the long main street, Palmerin Street with Grafton Street the major cross-street. The statue of former Queensland Premier Thomas Byrnes is located at their intersection.

Further information: List of sites on the Queensland Heritage Register in Warwick

The Warwick Green Belt, on the banks of the Condamine River, features a sculpture of Tiddalik the mythical frog that drank all of the fresh water in a renowned Aboriginal Dreamtime story. 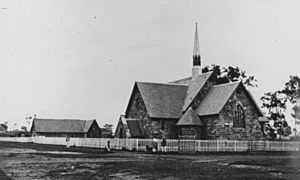 Second St. Mark's Church of England, Warwick, ca. 1872, the first (wooden) church can be seen in the background.

Patrick Leslie and his two brothers originally settled in the area as squatters, naming their run Canning Downs. In 1847 the NSW government asked Leslie to select a site on his station for a township, which was to be called 'Cannington,' although the name 'Warwick' was eventually settled on. Land sales were held in 1850, and the first allotment was bought by Leslie. The telegraph to Brisbane was operating by 1861. The 1870s were boom years for this new town. In 1871 the railway reached Warwick, a brewery was built in 1873, then a cooperative flour mill and brickworks were completed during 1874.

On 29 November 1917, the Warwick Incident occurred, which would lead to the formation of the Australian Commonwealth Police with the first commissioner for Commonwealth Police appointed eight days later. As Prime Minister William Morris Hughes was addressing a crowd at the Warwick railway station, a man in the crowd threw an egg dislodging the Prime Minister's hat. Hughes ordered his arrest but the Queensland State policeman present refused to carry out the orders saying that Hughes had no authority over him. 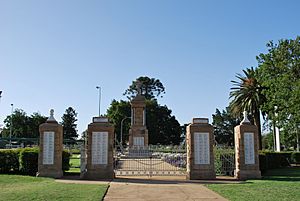 All content from Kiddle encyclopedia articles (including the article images and facts) can be freely used under Attribution-ShareAlike license, unless stated otherwise. Cite this article:
Warwick, Queensland Facts for Kids. Kiddle Encyclopedia.