Stanthorpe is a rural town and locality in the Southern Downs Region, Queensland, Australia. In the 2016 census, Stanthorpe had a population of 5,406 people.

The area surrounding the town is known as the Granite Belt.

The New England Highway passes through the town from Applethorpe to the north to Severnlea in the south. Originally it passed through the town centre along the main street, Maryland Street. However, it now bypasses to the west of the main developed area of the town. The Stanthorpe-Texas Road connects Stanthorpe to Broadwater to the west and then travels south-west to Texas.

The land within the boundaries of Stanthorpe is primarily used for urban purposes: housing, recreational, commercial and industrial with some undeveloped land on the hillier slopes. Although an agricultural centre of the Granite Belt, there is little agriculture within the town's boundaries. Crops grown in the surrounding area include vegetables, apples, grapes and stone fruit. Wine is also produced in the area, and sheep and cattle grazing is also prevalent. 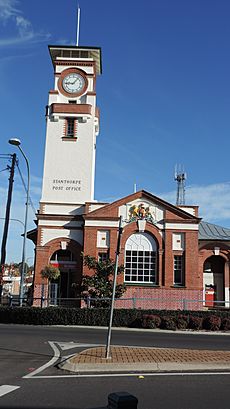 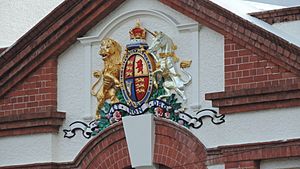 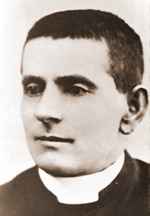 Stanthorpe was founded by tin miners. People came from many countries to mine tin from 1872. Prior to 1872 this area boasted some large pastoral runs and a few prospectors in bark huts. At that time, the area was known as ‘Quart Pot Creek’. The Private Township of Stannum existed in the area along one side of the present main street. With the discovery of tin and the influx of miners and new businesses, a ‘more suitable’ name was sought by the town fathers. Thus, Stanthorpe became the name which encompassed all, as this area became for a time, the largest alluvial tin mining and mineral field in Queensland. Stanthorpe literally means 'tintown', as Stannum is Latin for 'tin' and thorpe is Middle English for 'village'.

When the tin prices fell many miners turned to farming. The subtropical highland climate was very suitable for growing cool climate fruits and vegetables. Grapes were first planted here in the 1860s with encouragement from the local Catholic parish priest Father Jerome Davadi to produce altar wine. His Italian descent made grape growing and wine production a familiar pastime and the notion caught on in the area. There were plenty of Italian settlers and wine was made for home enjoyment.

The railway reached Stanthorpe in May 1881.

The cool dry climate was valued as an aid to health from the early nineteenth century especially for those suffering from tuberculosis or chest conditions. Following the First World War, Stanthorpe was a major resettlement area for soldiers recovering from mustard gas exposure. Many of these Soldier Settlers took up the land leased to them in the areas around Stanthorpe which now bear the names of First World War battlefields. 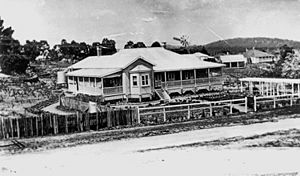 Stanthorpe has a number of heritage-listed sites, including:

Owing to its elevation, Stanthorpe features a subtropical highland climate. At an altitude of 811 metres (2,661 ft), Stanthorpe holds the record for the lowest temperature recorded in Queensland at −10.6 °C (12.9 °F) on 23 June 1961. Sleet and light snowfalls are occasionally recorded, with the most significant snowfall in over 30 years occurring on 17 July 2015. 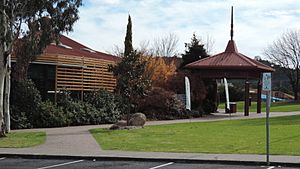 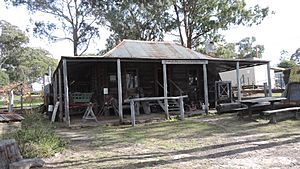 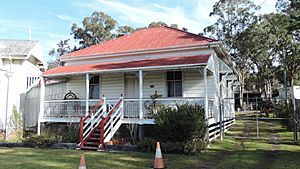 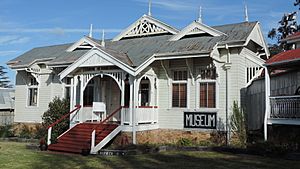 The Stanthorpe Heritage Museum at 12 High Street has a number of heritage buildings relocated to the museum site and a large number of displayed items from the district's history, many unique to the Granite Belt. The relocated buildings include:

There are local events, including the Primavera, the Australian Small Winemakers Show, the Apple & Grape Harvest Festival and the Stanthorpe Show. 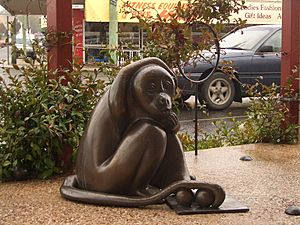 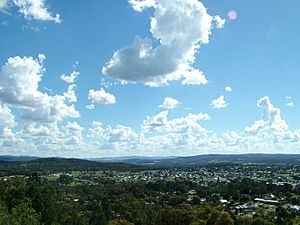 South-West aspect of Stanthorpe Township as seen from Mt Marlay

Stanthorpe and the surrounding Granite Belt and Granite Highlands area of South East Queensland and Northern New South Wales are the centre of a booming winery and national parks tourist destination. There are more than 50 wineries in the Granite Belt area. The Granite Belt national parks are Girraween, Bald Rock, Sundown, and Boonoo Boonoo. The region operates its own wine and tourism marketing body named Granite Belt Wine Country.

There is a wide range of restaurants, accommodation places and other tourist venues. Backpacking is popular and there is large demand for fruit and vegetable pickers from November until May each year.

Several private art galleries operate in Stanthorpe including the Glen Aplin Art Gallery which supports emerging artists and musicians who wish to display new works and perform at public functions. 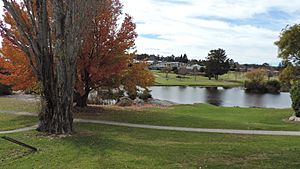 Parkland has been developed along both sides of Quart Pot Creek as it flows through Stanthorpe with a network of paths for walking and cycling with bridges and other crossings.

Stanthorpe is on the Southern railway line. However, as at 2015, there are no scheduled passenger services operating to Stanthorpe railway station.

Stanthorpe Airport is a public airport operated by the Southern Downs Regional Council. There are no regular scheduled services to Stanthorpe.

All content from Kiddle encyclopedia articles (including the article images and facts) can be freely used under Attribution-ShareAlike license, unless stated otherwise. Cite this article:
Stanthorpe, Queensland Facts for Kids. Kiddle Encyclopedia.