Applethorpe is a rural town and locality in the Southern Downs Region, Queensland, Australia. In the 2016 census the locality of Applethorpe had a population of 511 people.

Applethorpe is on Queensland's border with New South Wales. It is well known for the production of apples.

The area was originally called Roessler after an early German settler, but the name was changed to Applethorpe (reflecting the apple orchards in the district) in 1915, as part of the anti-German sentiment during World War I.

In 1910, the establishment of the Four Mile Stanthorpe School was given and the school was opened on 14 September 1911. However, from November 1911 to November 1916, it was called Roesseller State School. However, like the town itself, the school name was changed to Applethorpe State School due to the anti-German sentiment during World War 1.

Applethorpe Post Office opened around 1919 (a receiving office had been open since 1916) and closed in 1991.

The town is positioned on the New England Highway just north of Stanthorpe in the Granite Belt region at an elevation of 872 meters (2,861 ft). 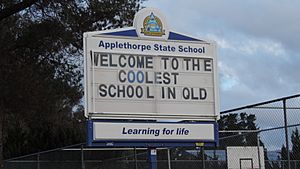 In 2006, Applethorpe had a population of 748; of which, 20% worked in the farming or produce industries.

The Applethorpe Memorial Park on Ann Street commemorates those who served in defence of Australia.

Applethorpe is accessible by the New England Highway and the 'Fruit Run' Granite Tourist Drive. Crisps Coaches also runs regular services to Applethorpe from Brisbane, Toowoomba, and other cities in the area.

All content from Kiddle encyclopedia articles (including the article images and facts) can be freely used under Attribution-ShareAlike license, unless stated otherwise. Cite this article:
Applethorpe, Queensland Facts for Kids. Kiddle Encyclopedia.