Dalveen is a town and a locality in the Southern Downs Region, Queensland, Australia. It borders New South Wales. In the 2016 census, Dalveen had a population of 335 people. 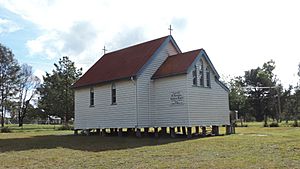 The name Dalveen derives from locality name given by settler John Flint, who named it after a pass in Lanark, Scotland.

Dalveen has a number of heritage-listed sites, including: 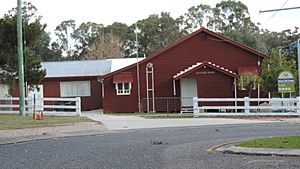 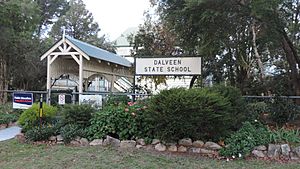 St Barnabas Anglican Church holds a service on the 4th Sunday of each month.

The Dalveen public hall and Dalveen State School are both in Pine Crescent. 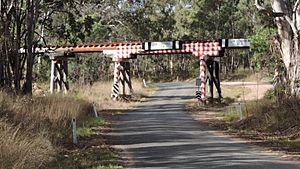 Railway bridge on the Southern line over Old Stanthorpe Road at Cherry Gully, 2015

The Southern railway line passes through Dalveen; the hilly terrain necessitated two tunnels known as the Dalveen Tunnel and the Cherry Gully Tunnel and a rail bridge over Old Stanthorpe Road. The line is no longer in active service.

All content from Kiddle encyclopedia articles (including the article images and facts) can be freely used under Attribution-ShareAlike license, unless stated otherwise. Cite this article:
Dalveen, Queensland Facts for Kids. Kiddle Encyclopedia.