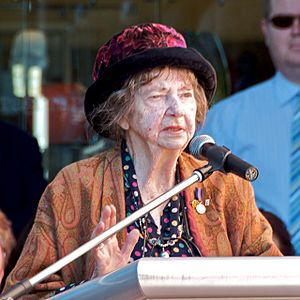 Margaret Olley ( 24 June, 1923, Lismore, New South Wales - 26 July, 2011, Paddington, New South Wales) was an Australian artist. She was well known for generous gifts of paintings and money to public art galleries in Australia. These gifts included works by Cezanne and Picasso. She is also famous for being the model for portraits. Two paintings of her won the Archibald Prize; William Dobell's painting in 1948, and Ben Quilty's in 2011. She was described by Julia Gillard, the Prime Minister of Australia, as a great artist and a true Australian national treasure.

She grew up on sugarcane farms in Queensland, and her artistic talent was noticed at school. Her teachers convinced her parents she should study art at the Brisbane Technical College. She then moved to Sydney and studied art at the East Sydney Technical College. She held the first of her 90 exhibitions in 1948. Many of her paintings were of things around her home such as flowers and bowls of fruit. In 1996 she was given Australia's highest honour, the Companion of the Order of Australia.

All content from Kiddle encyclopedia articles (including the article images and facts) can be freely used under Attribution-ShareAlike license, unless stated otherwise. Cite this article:
Margaret Olley Facts for Kids. Kiddle Encyclopedia.