Lismore is a city in northeastern New South Wales, Australia and the main population centre in the City of Lismore local government area; it is also a regional centre in the Northern Rivers region of the State. Lismore had an estimated urban population of 29,413 at June 2015.

The European history of the city begins in c. 1843: a pastoral run covering an area of 93 square kilometres (36 sq mi) was taken up by Captain Dumaresq at this time covering the Lismore area and was stocked with sheep from the New England area. Ward Stephens took up the run in the same year, but the subtropical climate was unsuited for sheep grazing, so it was eventually abandoned. In January 1845, William and Jane Wilson took it over. The Wilsons were Scottish immigrants, who arrived in New South Wales in May 1833. One theory has it that Jane Wilson was responsible for naming the location for Lismore, Scotland, where the couple had honeymooned, whereas another one is that it was named after Lismore, Ireland because of the similarity in the scenery.

In 1855, the surveyor Frederick Peppercorne was instructed by Sir Thomas Mitchell to determine a site for a township in the area. Peppercorne submitted his map of the proposed village reserve on 16 February 1856. The chosen site was William Wilson's homestead paddock and the area was proclaimed the "Town of Lismore" in the NSW Government Gazette on 1 May 1856. The township was soon settled and its Post Office was opened on 1 October 1859. Lismore was incorporated as a municipality on 5 March 1879, and was eventually proclaimed a city on 30 August 1946. From the mid-1950s until the early 1960s Lismore hosted an annual Floral Carnival in early September. The week-long programme of events culminated in a street parade of decorated floats, crowning of the Floral Queen and a fireworks display.

Lismore and surrounding towns were once part of the rainforest referred to as "The Big Scrub", of which less than one percent remains following the European settlement. A section of this rainforest is viewable in the grounds of the Southern Cross University and at Wilsons Nature Reserve on Wyrallah Road. 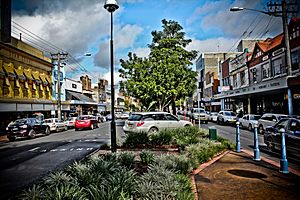 Lismore is located on the Bruxner Highway and it lies at the confluence of the Wilsons River (a tributary of the Richmond River) and Leycester Creek, The state capital city of Sydney is located 764 km (475 mi) to the south by highway. Brisbane, the state capital of Queensland, is 200 kilometres (124 mi) to the north.

Lismore's central business district is located 35 kilometres (22 mi) from the eastern coast, and 46 kilometres (29 mi) southwest of Byron Bay. The coastal town of Ballina is 36 kilometres (22 mi) away. There are a number of rainforest patches in the area, remnants of the Big Scrub. These are preserved today, with a small pocket known as Boatharbour Reserve just east of town on the Bangalow road. The nearest large and publicly accessible national park is Nightcap National Park.

Lismore experiences a humid subtropical climate with mild to warm temperatures all year round and ample rainfall. Temperatures in summer range between 20 °C (68 °F) and 35 °C (95 °F). The subtropical climate combined with geographical features means the urban area is unusually humid when compared with surrounding areas, with humidity levels often reaching 100% in summer. Lismore has 109.6 clear days annually.

Although no major environmental hazards affect the area, Lismore is renowned for frequent floods. One of the worst of these occurred in 1974, when waters rose to a height of 12.1 metres (40 ft). In 1954, Queen Elizabeth II and the Duke of Edinburgh almost became flood-bound by one such inundation when they were staying at the Gollan Hotel. Following a flood in 2001, the then Premier of New South Wales, Bob Carr, initiated a flood levee program to curb the problem. Nonetheless, around 3000 residents of Lismore were evacuated after floods affected much of the area on 30 June 2005, many being temporarily housed on the campus of Southern Cross University. However, a new levee that had been completed two weeks prior limited damage and stopped the water reaching the central business area.

Lismore is often hit by severe storms in spring and summer. For example, there was a severe hailstorm on 9 October 2007. A tornado is an extreme rarity, but later that same month one struck nearby Dunoon. It was captured on video as it hit an electrical transformer station there. 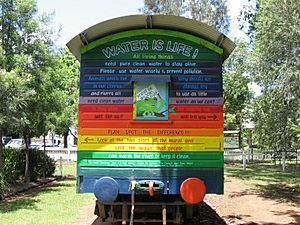 The Rainbow Train in Heritage Park in Lismore

Lismore's population in 2015 of 29,413 reflects marginal growth at an average annual rate of 0.1 percent over the preceding five years.

The Norco Co-operative has its headquarters in Lismore. The main campus of Southern Cross University is in Lismore.

Lismore formed a sister city relationship with the Japanese city of Yamatotakada in Nara Prefecture in 1963. The first such relationship established between Australia and Japan, it was initiated by Lismore-born Marist priest and writer Paul Glynn. Lismore is also a sister city of Eau Claire, Wisconsin and Lismore, County Waterford, Ireland.

Lismore is featured in the first verse of the original version of Geoff Mack's "I've Been Everywhere" and also mentioned in the Midnight Oil song "Outside World".

All content from Kiddle encyclopedia articles (including the article images and facts) can be freely used under Attribution-ShareAlike license, unless stated otherwise. Cite this article:
Lismore, New South Wales Facts for Kids. Kiddle Encyclopedia.