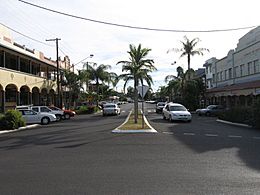 Casino is a town in the Northern Rivers area of New South Wales, Australia, with a population of 9,629 people at the 2011 census. It lies on the banks of the Richmond River and is situated at the junction of the Bruxner Highway and the Summerland Way.

Casino is the seat of the Richmond Valley Council, a local government area.

The town is named after the Casino Station, owned by Clarke Irving, which was named after Cassino (near Monte Cassino) in Italy, with which it has a sister city agreement.

Casino is among Australia's largest beef centres. It is the regional hub of a very large cattle industry and positions itself as the "Beef Capital" of Australia, although the city of Rockhampton also claims this title. In addition it is the service centre for a rich agricultural area.

Each year the town celebrates Beef Week. It was not held in 2007 but since that year, has continued to be held and celebrated.

Casino station is situated on the main North Coast railway line between Sydney and Brisbane, north of Grafton. A branch line ran via Lismore to Murwillumbah; that line has since been closed, although lobbying is taking place to re-open it. Casino railway station is the terminus of the daily Casino XPT from Sydney and there is a daily service to and from Brisbane via the Brisbane XPT.

In the 1920s, a never completed railway branch line to Bonalbo was started.

Casino is serviced by Lismore Airport with several daily flights to Sydney.

Northern Rivers Buslines operates rural services to Lismore (670) and Kyogle (675) each weekday, with one return service to Tenterfield available on Monday, Wednesday and Friday.

All content from Kiddle encyclopedia articles (including the article images and facts) can be freely used under Attribution-ShareAlike license, unless stated otherwise. Cite this article:
Casino, New South Wales Facts for Kids. Kiddle Encyclopedia.