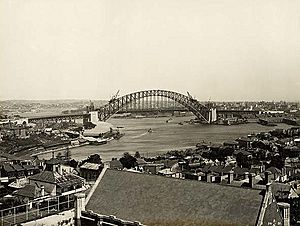 Lavender Bay was named after the Boatswain (bosun), George Lavender, from the prison hulk "Phoenix", which was moored there for many years. The bay was originally called Hulk Bay and sometimes Phoenix Bay. George Lavender lived on 14 acres (57,000 m2) adjacent to the property of Billy Blue. On 30 May 1915 Lavender Bay railway station was opened to take the place of Milsons Point railway station. This only lasted for seven weeks, as passengers refused to alight here and demanded that trains stop at Milsons Point. During the harbour bridge construction, Lavender Bay Station was the terminus for the North Shore Line. The area is now railway storage sidings.

All content from Kiddle encyclopedia articles (including the article images and facts) can be freely used under Attribution-ShareAlike license, unless stated otherwise. Cite this article:
Lavender Bay, New South Wales Facts for Kids. Kiddle Encyclopedia.