Quart Pot Creek Rail Bridge is a heritage-listed railway bridge at Quart Pot Creek, Stanthorpe, Southern Downs Region, Queensland, Australia. It was built in 1886. It is also known as the Red Bridge. It was added to the Queensland Heritage Register on 21 October 1992. 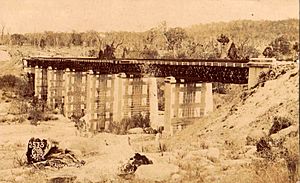 The Quart Pot Creek Rail Bridge was constructed in 1886 as part of the former Brisbane-Sydney interstate rail link. 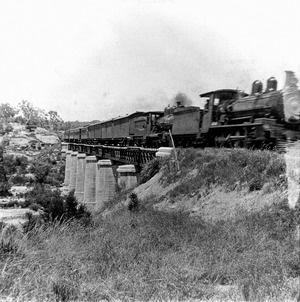 The major impetus to development in Stanthorpe occurred in 1872 with the start of the practice of alluvial tin mining after discoveries of the valuable metal in the area in the mid 1850s. Stanthorpe became the collective name for two townships (“Quart Pot Creek” and “Stannum”) that grew as a result of the mining boom and became the only centre on the pastoral Darling Downs to develop with mining based revenue.

The Quart Pot Creek Rail Bridge forms part of the Southern railway line (Toowoomba - Warwick- Wallangarra). The line reached Warwick in 1871 and was extended to Stanthorpe to serve the tin industry in 1881. The railway was then extended to the border with New South Wales. The Quart Pot Creek Bridge was built as part of this extension. The original plans were drawn in 1880 and the contract plans were drawn up in 1884. The line opened for traffic between Stanthorpe and Wallangarra, the change of gauge border station, on 4 February 1887. Interstate rail services commenced on 16 January 1888, linking Brisbane with Sydney, Melbourne and Adelaide. Plans to strengthen the 50-foot (15 m) girder spans had first been drawn up in 1904 to permit the operation of heavier locomotives on the Sydney Mail and work began on the Warwick-Wallangarra section in 1910. The No.7 span was braced in 1913 to further accommodate 12-ton axle loads. 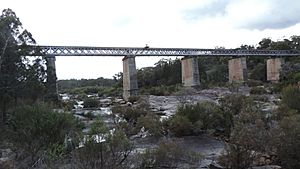 The Quart Pot Creek Rail Bridge comprises 7 50-foot (15 m) spans of 3 rivetted deck type metal double lattice girders supported on six concrete piers and two abutments. It has a total length of 106.7 metres (350 ft). The centre girders, the pier tops and bedplates have been altered. The No.7 span has been braced. The bridge carries a single 1.07-metre (3 ft 6 in) gauge railway. 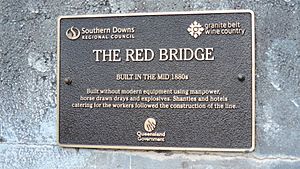 A plaque has been added to the bridge to outline its historical significance.

Quart Pot Creek Rail Bridge was listed on the Queensland Heritage Register on 21 October 1992 having satisfied the following criteria.

The Quart Pot Creek Rail Bridge is an important part of what was formerly the interstate link between Brisbane and Sydney. It is the fourth oldest bridge of its type in Queensland.

The bridge demonstrates a robust engineering design, which has allowed it to be upgraded whilst retaining its essential character.

All content from Kiddle encyclopedia articles (including the article images and facts) can be freely used under Attribution-ShareAlike license, unless stated otherwise. Cite this article:
Quart Pot Creek Rail Bridge Facts for Kids. Kiddle Encyclopedia.