Wallangarra is a town and locality in the Southern Downs Region, Queensland, Australia. It is the third most southerly town in Queensland, 258 kilometres (160 mi) south west of Brisbane. Wallangarra is on the Queensland side of the border and Jennings is on the New South Wales side. At the 2006 census, Wallangarra had a population of 385.

In 1885, the Queensland government announced that a town would be formed where the railway line between Queensland and New South Wales would meet. On 29 June 1885, 179 lots were offered for sale at £8 per acre (£20/ha).

Wallangarra lies in a valley between two ranges of mountains, which each are branches of the Great Dividing Range. It is 878 m above sea level. There is a gap between the more Westerly range at Wyberba, about five kilometres north of Wallangarra. This gap has made Wallangarra the major inland border crossing for the New England Highway and what was the first railway line between Brisbane and Sydney. 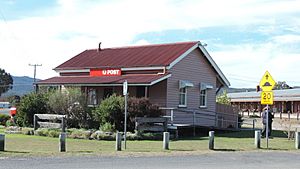 Climate data is recorded at the Wallangarra Post Office

Wallangarra is one of the coldest towns in Queensland, due to its altitude and extreme southerly location in the state. Maximum temperatures rarely rise above 15 °C (59 °F) in winter or above 30 °C (86 °F) in summer. Wallangarra holds the record for the lowest maximum temperature in Queensland, 2.4 °C (36 °F) on 3 July 1984. Despite this, minimum temperatures are not as low due to local geographic variations, and towns well to the north such as Warwick and Oakey frequently record lower minimums. 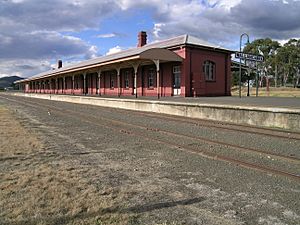 Wallangarra station which is listed on the Register of the National Estate. Note the different style of awnings and the Queensland side compare to the New South Wales side

The town was created to service a break-of-gauge between Queensland's narrow gauge Southern railway line of 3 ft 6 in (1,067 mm) and New South Wales's standard gauge Main North railway line of 4 ft 8+1⁄2 in (1,435 mm) when the two systems came together in 1888. The railway was the only rail link between Queensland and New South Wales until a standard gauge track was completed in 1932, with the completion of the bridge at Grafton. From that time on, the Wallangarra station lessened in importance. All scheduled rail services stopped in 1997. In 2003, after major refurbishment, the station was reopened as a museum.

Despite being declared as Wallangarra, the station itself has the Queensland name boards hyphenated as Wallan-Garra.

Wallangarra has a number of heritage-listed sites, including:

Taking advantage of the rail junction Riverina Stock Feeds operated a packing plant opposite the Wallangarra railway station for many years until 1995. After that it moved to Warwick, a city 100 kilometres (62 mi) to the north. Warwick also has a major Woolworths warehouse. Interestingly the Chairman of Woolworths who located the warehouse at Warwick grew up in Wallangarra.

The Anderson Meat Packing Company was re-started by Mr. A.W. Anderson in 1938 after a 15 month closure. Until 1982 it operated a large beef abattoir at Wallangarra. Anderson's employed in excess of 400 workers at the Wallangarra plant. The plant was located on the border so as to take advantage of rail lines from both Queensland and NSW.

After this closed the town's future looked dim. Ten years later, Thomas Foods International opened Australia's largest mutton works opened on a new site just to the east of the town. The mutton produced is Halal, and most of it is exported to Arab countries. The abattoir shut down in July 2016 for "the short to medium term" blaming low stock numbers and poor global trading conditions.

Drive out along Margetts St, over the railway bridge, past the Rugby League grounds and out past the army. From there follow Old Paling Yard Road up the foot hills of Mt Norman. There you will find a water treatment plant and a road branch to the left going down to Beehive dam. Beehive dam is in the mountains, and fed by a spring. It is a beautiful place for a picnic. 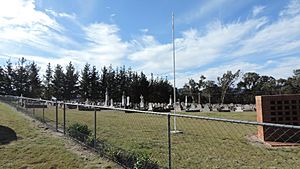 The Wallangarra cemetery is in McCall Street.

All content from Kiddle encyclopedia articles (including the article images and facts) can be freely used under Attribution-ShareAlike license, unless stated otherwise. Cite this article:
Wallangarra, Queensland Facts for Kids. Kiddle Encyclopedia.