Ballandean is a rural town and locality in the Southern Downs Region, Queensland, Australia. In the 2016 census the locality of Ballandean had a population of 338 people.

Ballandean is in the Granite Belt Region of the Southern Downs. It is on the Queensland border with New South Wales. The town has a number of nearby vineyards which attracted tourists to the area.

The New England Highway passes through Ballandean from north to south in the north-east of Ballandean in close parallel to the Southern railway line. The Ballandean railway station is in this area and the urban development surrounds the railway station. The station is now closed as there are no passenger services on this line. The rest of the locality is predominantly farmland. 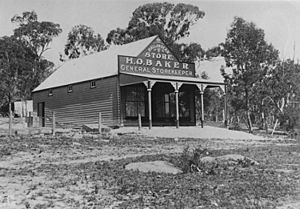 The name Ballandean derives from the name of a pastoral run, belonging to Henry Hayter Nicol in 1841, believed to be linked to his childhood association with Ballindean House, near Inchture, Perthshire, Scotland.

The town was surveyed and officially named in 1872. Thomas Fletcher built the Britannia Inn in the same year which attracted other businesses to the area. Fletcher went on to establish the first commercial orchard on the Granite Belt. Ballandean Post Office opened on 1 January 1873. 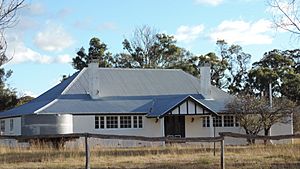 Ballandean has a number of heritage-listed sites, including:

The man-made Ballandean Pyramid was constructed by Ken Stubberfield as a way to dispose of excess granite on his farm and is an unusual sight in Queensland.

The Balladean railway station is a well-known landmark on the New England Highway due to the big dinosaur in front of it, nicknamed the Fruitisforus (Fruit-is-for-us). The dinosaur was originally constructed for a float in the 1998 Apple and Grape Festival. After the festival, the community placed it in front of the railway station to get passing traffic to stop and buy fruit for a community fundraiser. It proved so popular that it was reinforced with fibregrass and painted and made a permanent roadside feature. It is 6.7 metres (22 ft) long and 2.1 metres (6 ft 11 in) high.

All content from Kiddle encyclopedia articles (including the article images and facts) can be freely used under Attribution-ShareAlike license, unless stated otherwise. Cite this article:
Ballandean, Queensland Facts for Kids. Kiddle Encyclopedia.