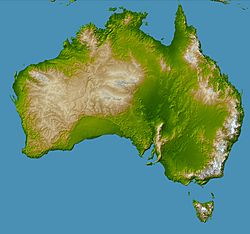 Green areas are the low-lying areas. Most of these area are part of the Great Artesian Basin: see ref #2 for a better map 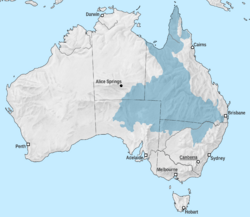 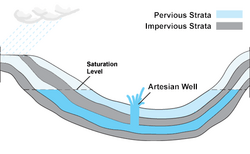 Geological strata giving rise to an artesian well. The principle is the same for a huge basin 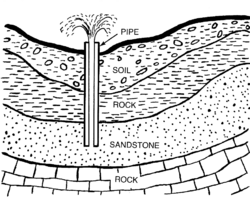 Schematic of an artesian well

The Great Artesian Basin in Australia is the largest and deepest aquifer (artesian basin) in the world. It stretches over 1,711,000 square kilometres (661,000 sq mi), which is 22% of the surface area of Australia. This includes most of Queensland, the south-east corner of the Northern Territory, the north-east part of South Australia, and northern New South Wales. The basin is 3,000 metres (9,800 ft) deep in places. It may contain 64,900 cubic kilometres (15,600 cu mi) of groundwater. Its temperature ranges from 30°C to 100°C.

The basin is the only reliable source of freshwater through much of inland Australia. The Great Artesian Basin Coordinating Committee (GABCC) coordinates activity between the various levels of government and community organisations.

The water of the GAB is held in a sandstone layer laid down by continental erosion of higher ground during the Triassic, Jurassic, and Lower Cretaceous periods. At the time when much of what is now Australia was below sea level. The sandstone was then covered by a layer of marine sedimentary rock. This formed a confining layer, trapping water in the sandstone aquifer. The eastern edge of the basin was uplifted when the Great Dividing Range formed. The other side was created from the landforms of the Central Eastern Lowlands and the Great Western Plateau to the west.

Most water enters the rock formations from the higher ground near the eastern edge of the basin (in Queensland and New South Wales). It very gradually flows towards the south and west. A much smaller amount enters along the western margin in arid central Australia, flowing to the south and east. Because the sandstones are permeable, water gradually makes its way through the pores between the sand grains, flowing at a rate of one to five metres per year.

Discharge water eventually exits through a number of springs and seeps, mostly in the southern part of the basin. The age of the groundwater is got by measuring carbon-14 and chlorine-36. It ranges from several thousand years for the recharge areas in the north to nearly 2 million years in the south-western discharge zones.

All content from Kiddle encyclopedia articles (including the article images and facts) can be freely used under Attribution-ShareAlike license, unless stated otherwise. Cite this article:
Great Artesian Basin Facts for Kids. Kiddle Encyclopedia.