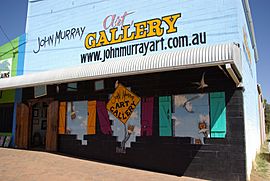 Lightning Ridge is a town in north-western New South Wales, Australia, in Walgett Shire, near the southern border of Queensland, about six kilometres east of the Castlereagh Highway, and is served in commercial activities by the town of Walgett, some 75 km to the south. Lightning Ridge is a flourishing tourist town with numerous caravan (camper-trailer) and camping parks, the previously very rustic Diggers' Rest pub (which has burned down for the third time. The name Lightning Ridge is said to have originated when in the 1870s some passers by found the bodies of a farmer, his dog and 200 sheep which had been struck by lightning.

In 2001 it had a population of 1,826, of whom 344 (18.8%) are Indigenous Australians and 1,304 (71.4%) are other Australians. The population is said to be highly variable as transient miners come and go over time. In Lightning Ridge (Urban Centre - Locality), the most popular industries of employment were Education 4.5%, Accommodation, Cafes and Restaurants 4.1%, Other Mining 4.0%, Community Services 2.7% and Personal and Household Good Retailing 2.5%. Prior to the 2004 Public Enquiry into the functioning of Walgett Shire, it worked on the basis that there were about 7,000 people in the town, but the enquiry found that this estimate was given no support by the 2001 census and contrasted with the 1,109 people who voted in the town at the local government elections in 2004 in the 2011 census the population had increased to 4501 the large increase was due to a dramatic increase in mining and related industries. At the 2006 census, Lightning Ridge had a population of 2,602 people.

The town was listed as one of the poorest locales in the state according to the 2015 Dropping Off The Edge report.

The traditional owners of the land around Lightning Ridge are the Yuwaalaraay people. After they were displaced by the establishment of colonial pastoral stations, many Yuwaalaraay people stayed on as labourers, but were increasingly dispersed in the early 20th century. In 1936, several Indigenous families living at a local government settlement were forced to move to the Brewarrina settlement. Since that time, the local Indigenous population has increased because of the influx from other regions of Indigenous people seeking work in opal mining or agriculture.

Lightning Ridge hosted an annual goat race in the town's main street and a rodeo on the Easter long weekend until 2011. Goats were harnessed and driven by children, much like harness racing in equine sports. The goat races were accompanied by wheelie-bin races, and horse racing the following day.

The town has a five star Olympic Pool, a diving complex, a rock climbing wall at the pool and Water Theme Park which operates during the summer months. Parts of the pool are protected by shade and the complex has barbecue facilities.

The town also has the Ella Nagy youth hall which accompanied by a skate park.

Lightning Ridge has many more activities like the Gem festival that happens once every year and the Easter rides.

Some artists have settled in and around Lightning Ridge. One of the most famous local Australian painters is John Murray who brings the impressions of the Outback, often in a situation with man or fauna onto the canvas.

Lightning Ridge is an important paleontological site, with fossils dating back to the Cretaceous period, 110 million years ago. The sandstone rock once formed the bottom of a shallow inland sea where the remains of aquatic plants and animals were preserved. The site is especially important as a source of fossils of ancient mammals which, at that time, were small creatures living in a world dominated by dinosaurs. The fossils are sometimes opalised and discovered by opal miners. Important discoveries at Lightning Ridge include the ancestral monotremes Kollikodon ritchiei and Steropodon galmani.

Since August 1992 when the Mining Act 1992 commenced, fossicking licences have not been required for fossicking in New South Wales. DPI Mineral Resources.

Under the terms of this Act, fossicking may now be carried out anywhere in the state providing the following conditions are met: 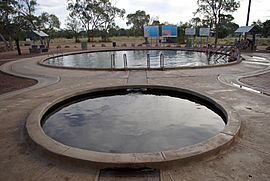 •No other Act or law applies which would prevent it;
•The landholder's consent is obtained;
•The consent of any public or local authority having the management, control or trusteeship of the land is obtained; and
•The titleholder's consent is also obtained, where the location is covered by a current title under the Mining Act 1992 Legislation. (This title may be an exploration licence, assessment lease, mining lease, mineral claim or Opal Prospecting Licence).

Lightning Ridge has an abundance of hot water from a bore spring into the Great Artesian Basin and offers two hot water pools for bathing. The minerals make the water very healthy for external use and drinking. The public can tap mineral water at a hose in Harlequin Street. The Hot Artesian Bore Baths and Nettletons Shaft, on McDonald's Six Mile Opal Field have been placed on the Register of the National Estate.

All content from Kiddle encyclopedia articles (including the article images and facts) can be freely used under Attribution-ShareAlike license, unless stated otherwise. Cite this article:
Lightning Ridge, New South Wales Facts for Kids. Kiddle Encyclopedia.