Cootamundra, nicknamed Coota, is a town in the South West Slopes region of New South Wales, Australia and within the Riverina. It is within the Cootamundra-Gundagai Regional Council. At the 2016 Census, Cootamundra had a population of 6,782. It is located on the Olympic Highway at the point where it crosses the Muttama Creek, between Junee and Cowra. Its railway station is on the Main Southern line, part of the Melbourne-to-Sydney line.

Cootamundra is the birthplace of Sir Donald Bradman AC, an Australian cricketer universally regarded as the greatest batsman of all time. It is also known for being the site of Cootamundra Domestic Training Home for Aboriginal Girls, an institution housing Aboriginal girls who were forcibly taken from their families.

It is also the home of the Cootamundra wattle. Every year there is a large "Wattle Time" Festival held at the time the wattle starts to bloom, with an art show and festivities. 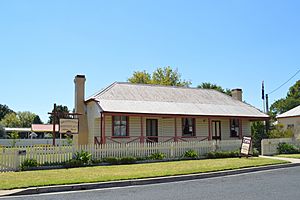 The earliest people to live in the area where present day Cootamundra exists are considered to be the tribe of Wiradjuri, with the name probably deriving from their word guudhamang for "turtle". 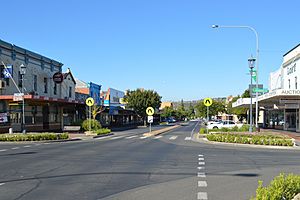 Cootamundra was incorporated as a township on 9 August 1861, and the first settlers bought their lots in early 1862. Like many other towns in the Riverina, it was originally populated by those attracted by the gold rush of the 1860s, but became a quiet yet prosperous agricultural community after the local deposits were exhausted.

The town's rugby league team competed in the Maher Cup. 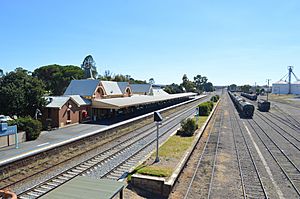 Cootamundra railway station is located on the Main Southern railway line, with passengers served in each direction by twice daily NSW TrainLink XPT railway services between Sydney and Melbourne, and the weekly Xplorer railway services to Griffith. Interstate freight trains also pass through the town.

Cootamundra acts as a hub for coach services, run by Transport for NSW, to other regional centres with departures and arrivals timed to connect with certain New South Wales XPT train arrivals. The exception is Services 704/703 (coloured row), provided for those who have business in Canberra civic, the major hospitals, or to connect with the Canberra–Sydney rail service (three trains per day both directions).

Seats are allocated and must be booked ahead. must be consulted for conditions of travel and coach stop locations. On-line booking and more information

Cootamundra Airport, is one of the oldest country airports outside of Mascot to be continually licensed.

From 1991 to 2002 local business Country Connection Airlines offered regional flights from Cootamundra to Sydney, as well as to many other regional locations such as West Wyalong, Cowra, Forbes and Young.

During World War 2, Cootamundra was the location of RAAF No.3 Inland Aircraft Fuel Depot (IAFD), completed in 1942 and closed on 14 June 1944. It was located in an area of land near the intersection of Olympic Highway and Thompson Street. Usually consisting of 4 tanks, 31 fuel depots were built across Australia for the storage and supply of aircraft fuel for the RAAF and the US Army Air Forces at a total cost of £900,000 ($1,800,000).

All content from Kiddle encyclopedia articles (including the article images and facts) can be freely used under Attribution-ShareAlike license, unless stated otherwise. Cite this article:
Cootamundra Facts for Kids. Kiddle Encyclopedia.